“Berry’s house,” between 1910 and 1925,* probably near Selma, California, by National Photo Company, via Library of Congress Prints and Photographs Division (all photos here).

I think this is the farm that Ethel and Clarence Berry bought near her parents’ home in Selma after they became millionaires in the Klondike gold rush.

Ethel was one of the first women miners to go to Alaska, leaving right after her wedding in 1896. The next spring, the couple struck it amazingly rich on the Eldorado and Bonanza Creeks.

When she arrived in Seattle that summer — headed to the bank alone with $100,000 in gold that she’d kept hidden in her bedroll — she was immediately embraced by the popular press as the “Bride of the Klondike.”

The Berrys invested their money in more Alaskan mines (and in oil) and stayed rich.  They moved between the farm in Selma and a home in Alaska until Clarence’s death in 1930. Ethel then moved to Beverly Hills.  She died there in 1948.

*I suspect the photos were taken closer to the earlier year given, judging from the photo of Ethel and her sister (after ‘Continue reading’). Ethel would have been 37 years old in 1910.

Click on any of the thumbnails in the gallery below to scroll through larger images. 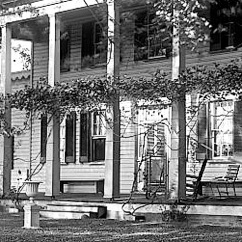 Detail: It’s the line of vines a little more than halfway up that really makes this porch — as well as the absence of any other foundation plants. 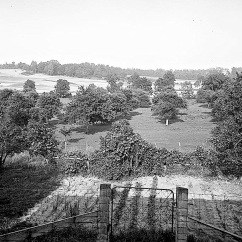 The Berry garden and orchard. Clarence Berry had been a fruit farmer in Selma before he left for the Klondike.

“Edna & Ethel” — I think Ethel may actually be the one on the left. Edna joined the Berrys in Alaska in 1898.

2 thoughts on “The Sunday porch: the Berry’s”