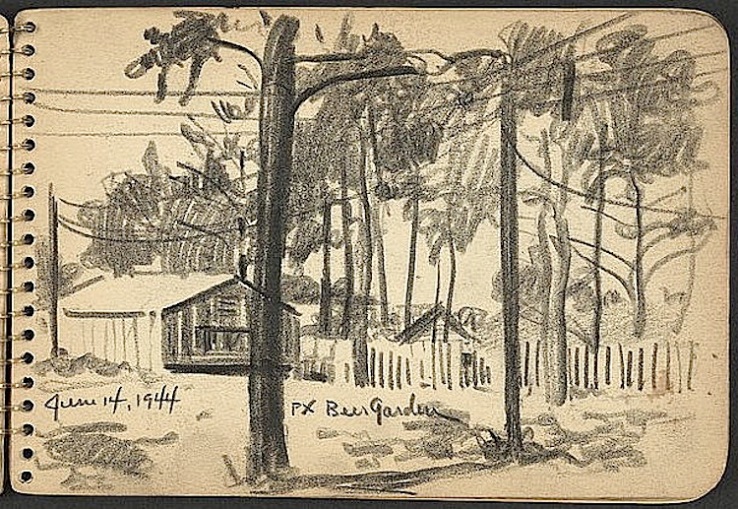 A beer garden is simply a shady outdoor area with tables and chairs where beer and sometimes food is served. The idea originated in the Bavaria region of Germany in the 19th century and soon came to America. There’s a brief history of beer gardens in the U.S. here.

Some American beer gardens were such pleasant, seemingly wholesome places that they rattled the resolve of the temperance movement. A woman on a committee investigating Chicago drinking spots wrote of one: “Isn’t it beautiful? Can it be, is it possible, that after all our ideas are wrong and these people are right?”

Beer gardens, like the one pictured above, were features of at least some homeland military camps and forts in the mid 1940s. Camp Mackall in North Carolina had six. I found a reference to one at Fort McClellan near Anniston, Alabama.

During his U.S. Army service, Victor Lundy filled eight sketchbooks with scenes of his training at Fort Jackson, his life on a transport ship crossing the Atlantic, and his frontline duty in France.

After the war, he became an architect, admired today for “his sculptural sense of form” and  “innovative use of engineering technology,” according to the Smithsonian Institution.