Note:  There is gallery of photos at the end.  I’m still having trouble successfully inserting pictures into my posts without tears.

We bought our 1920’s rowhouse last August.  The back garden is about 16′ x 74′.  We’re really lucky to have this much space in Glover Park, where normal is a tiny plot in front and a deck overlooking a parking pad out back.

What was already in our long narrow garden was not bad.  We have a deck, which sits about 4′ above the ground,  a 6 1/2′ tall stockade fence — nicely weathered — and a flagstone sidewalk to the back gate.

There’s a huge old holly tree (a male apparently, no berries) about two thirds of the way back.  It provides morning and mid-day shade and shields us from the view of some Wisconsin Avenue shops and restaurants (and their noise).  Unfortunately, it also drops its prickly little leaves like crazy in mid spring.

We also have a fairly mature weeping cherry just a few feet off the deck, which is currently under reprieve from the saw.  When we moved in, it was just a big green blob right down to the ground, blocking the view from the house of anything beyond it.  But I limbed it up considerably, and it’s turned into a pretty nice tree, so it may get to stay — although I can also think of some other small trees I would rather have.

We also inherited three  7′ tall arborvitae against one side of the fence.  I can’t figure out why they were put there.  I think sometimes people just install conifers as a reflex. They’re not too wide yet, but I know they someday will be if I don’t keep trimming up their sides (and I’m not sure how long they can take that treatment).  One of them fell halfway down in last winter’s snow, so we went ahead and pulled it out.  I’m still thinking about the fate of the other two.  I go back and forth on whether their height adds interest or not.

There were two planting beds.  One was a half oval jutting out into the grass from the fence, containing the three arborvitae and two big bigleaf hydrangeas.  The other was a 15″ -wide line bordering the sidewalk, with one single perennial following the other.

Most of the rest of the space was grass.  A short stacked stone wall circled the holly tree, and there was an empty mulched area of dry shade right by the back fence (now it’s filled with a big pile of everything I’ve cut down).

Overall, it was just rather dull and static.

I want the forms and textures of my little garden to suggest those of the larger landscape — an edge of a woodland, a side of a stream, and a rocky beach — to create a sort of small world enclosed.

First, I decided to remove all the grass except for a little circle right before the holly tree.  I left this just to have another place to sit and to be a little negative space in the design.  I edged it by taking some of the flattish wall stone from around the holly tree and sinking it down so we can mow easily (I might soften up this area in the future, maybe with buffalo grass).

I dug a 2′ wide curving path from the deck to the little circle lawn to allow access to the planting bed I made when I removed the grass.  This is my dry stream. I disassembled more of the stacked stone around the holly tree and set stepping stones at the beginning and end of the path.

To give better definition to my stream, I stacked more stone at the bends in the path, setting some of them at an angle to symbolize upheaval in the earth.  To add more textural interest and to keep the (future) pea gravel from washing down to the sidewalk, I set three rows of upright stones across the path.  I will cover the area under the deck (now just dirt and rubble) with 1″ – 2″ wash gravel.

I will somehow merge the dry stream-bed effect of the path with the rocky “beach” under the deck using the wall stone and some larger Delaware gravel.  “To be positioned on site by designer” is what would be on my plan, if I had drawn one.

I want to imply the presence of water since I can’t afford to actually install it (it would be very cool to run water down the center of the path and under the deck).  I’m inspired by the memory of a dry stream bed in The Dell of the Kirstenbosch National Botanical Garden, which I was lucky enough to visit several years ago.  (For a birdwatcher’s view of the park, click here.)

It all sounds like a bit much for a small space, but what I’ve done so far seems to work, and of course it doesn’t actually scream WOODS/STREAM/BEACH when you see it.  The stones I’ve laid so far look pretty already (I’m waiting for the gravel), and I’ve planted some grasses and taller wavy native perennials.  It’s starting to get a little more tactile appeal.

I’m still thinking out the planting plan; I’m sure I’ll move almost everything around in the fall.  I think the hydrangeas will go — they’re just too big and “cultivated”, and they wilt in the heat.  I’ve already taken out some yellow daylilies that were too showy and irritating me.  They can go outside the back gate.

I’ll give an update after the gravel arrives.

Click on any thumbnail photo below to scroll through all the enlarged pictures. 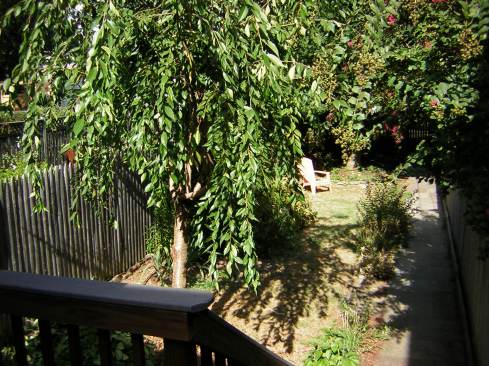 The view from the steps to the deck before any significant changes were made other than limbing up the cherry tree.

Current view from the deck. 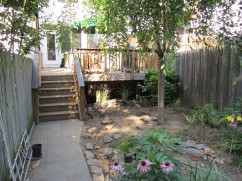 A view of the deck after removing two of the shrubs that used to hide the under-deck area. I just thought they were too formal, and I want that little extra planting space.

Below the deck. I think the remaining shrub will come out and miscanthus “Morning Light” will go in. I’m thinking of planting a “Gloire de Dijon” climbing rose next year on the fence, either here or closer to the grassy area.

Half of the remaining grass. The area under the holly tree was mostly pachysandra and vinca. I’ve added some hostas that I found in the front garden, a viburnum that I haven’t yet identified, and some variegated Solomon’s seal. I also added some ostrich ferns, but they really need a damper spot.

The path will be paved with pea gravel and some larger smooth stones.

Upright stones set across the path.

The view to the back gate. You can just see the arborvitea to the left. 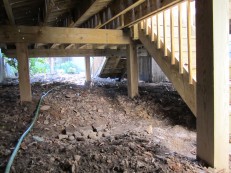 Under the deck from the back door of the basement, looking toward the garden, awaiting a cover of gravel.

4 thoughts on “The new garden”