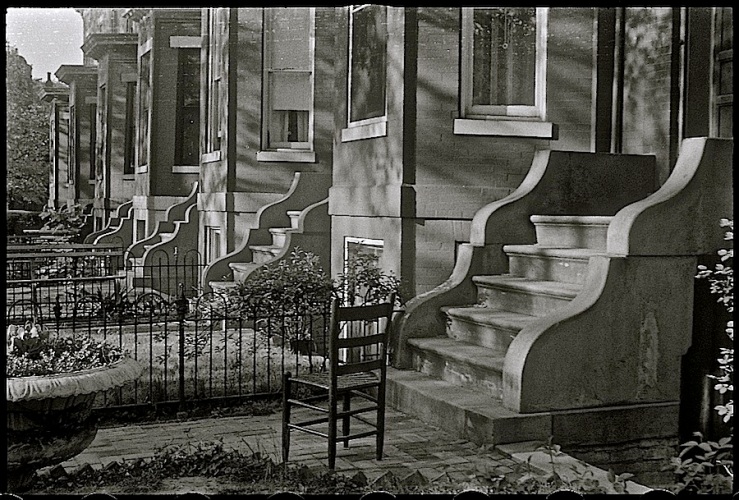 The name of the neighborhood was not given in the original caption.  It was only described as “one of the nicer old sections of the city.” It looks like Capitol Hill to me.

In his book, The American Porch, Michael Dolan attempts to trace the European, African, and Asian origins of our many types of porches.  The front stoop — several steps and a small landing — came from the Dutch.

Down the coast [from New England], in Nieuw Amsterdam, a different entry was proliferating.  Made of stone or brick, the stoep — Dutch for “step” — was a roofless link between doorway and street.  Though municipal tradition required a building’s occupants to maintain the stoep, the Dutch deemed it public territory.  However, in Nieuw Amsterdam, the stoop acquired a private connotation:  “. . . before each door there was an elevation, to which you could ascend by some steps from the street,” an observer wrote.  “It resembled a small balcony, and had some benches on both sides on which the people sat in the evening, in order to enjoy the fresh air, and have the pleasure of viewing those who passed it.”

The stoops above lack benches, but the owner of the first one has brought down a chair, and two doors down there is a park bench in the tiny garden.  You can see a similar arrangement here.