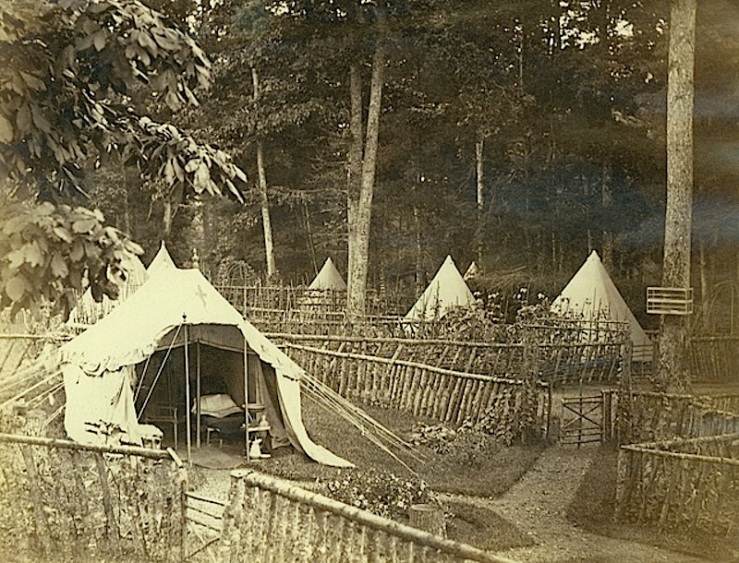 Major E. M. Bullers’s tent in the Prince Consort’s Own Rifle Brigade encampment at Grimsby, Ontario, between 1862 and 1864. Photo taken by a member of the Ridley* family and used here courtesy of Local History & Archives, Hamilton Public Library (both photos).

“Prince Consort’s Own” was a previous name of the British Army infantry regiment that is currently called “The Rifles.”  Their history during the Napoleonic Wars was popularized in Bernard Cornwell’s “Sharpe” novels.

A battalion of the Brigade was sent to the Grimsby/Hamilton† area during a British military buildup in Canada in response to the Trent Affair of 1861.  They arrived there in February 1862, just after the crisis had been resolved diplomatically — evidently clearing time for landscaping.

Above is another photo of the encampment, showing the tent of its Lieutenant, Lord Edward Cavendish.

The Library’s notes say that Hamilton had landed the most socially desirable regiment in Canada — after the Grenadier Guards, a prize won by Montreal.

*The photos are from the Mills Family Album.

†Grimsby is about 18 miles from Hamilton.

Leave a Reply to Cindy at enclos*ure Cancel reply