Great Washington, too, stands high aloft on his towering main-mast in Baltimore, and like one of Hercules’ pillars, his column marks that point of human grandeur beyond which few mortals will go.

Above: Baltimore’s Washington Monument under construction in 1828 (looking north).  A watercolor, ink, and graphite drawing by John Rubens Smith, via the Library of Congress.*

Completed in 1829, the monument was the second one erected to honor George Washington.  (A tower in Boonsboro, Md., was finished first, in 1827.)

The land for the 178′ tower and its surrounding park had been donated by John Eager Howard from part of his estate, Belvidere.  In the late 18th century, Belvidere was often praised for its fine high views, and the monument was originally visible from ships entering the harbor (today, 10 city blocks to the south).

Above: Detail of “The View of Baltimore from Governor John Eager Howard’s Garden Park,” 1796, via the Maryland Historical Society and Early American Gardens.

During the next twenty years, four small squares, one in each direction, were laid out around the monument.  They were originally planted with grass and surrounded by iron fences.  The well-to-do built homes, churches, and cultural institutions around the squares, which became known collectively as Mount Vernon Place.

“It [was] one of the first examples in the United States of a deliberate use of city planning to create a dramatic setting for an existing monument,” according to the Trust for Architectural Easements.

Mount Vernon Place has undergone several design and planting changes since about 1850, according to the Mount Vernon Place Conservancy.  The photo above and those below show the 1875-76 paths and stone walls of Frederick Law Olmsted’s firm.

Above:  The south side, ca. 1902, by William Henry Jackson (Detroit Publishing Co.). 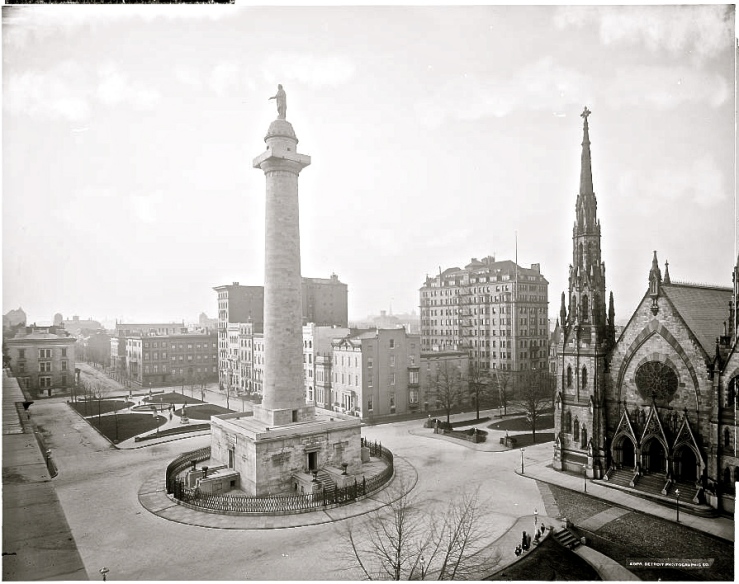 This last photo shows the work of Thomas Hastings of the architecture firm of Carrère and Hastings.  In 1917, he redesigned the squares in the Beaux-Art style.  According to the Mount Vernon Place Conservancy:

[His] design was an exemplar of City Beautiful-inspired architectural and landscape design, which called for symmetry, uniformity and axiality.

Hastings utilized white marble to harmonize his new work with the existing monument, and retained the tradition in the east, west and north squares of matched trees framing the squares. After his hardscape work was completed, the trees in all of these squares were replanted to ensure they would mature uniformly, creating and maintaining a crisp border on their edges. Hastings supported this wholesale replanting as necessary for the future integrity of his design.

In the south square, however, he retained some of the existing large trees and shrubs to frame out a newly positioned statue of Lafayette.

It used to be possible go inside the monument and climb to the top.  I did it about 12 years ago.  There are 228 very claustrophobic steps.  The structure has not been open to the public for the last three years, however.

*All the images here are via the Library of Congress Prints and Photos Division, except the third, fourth, and last, which are via the Maryland Historical Society.