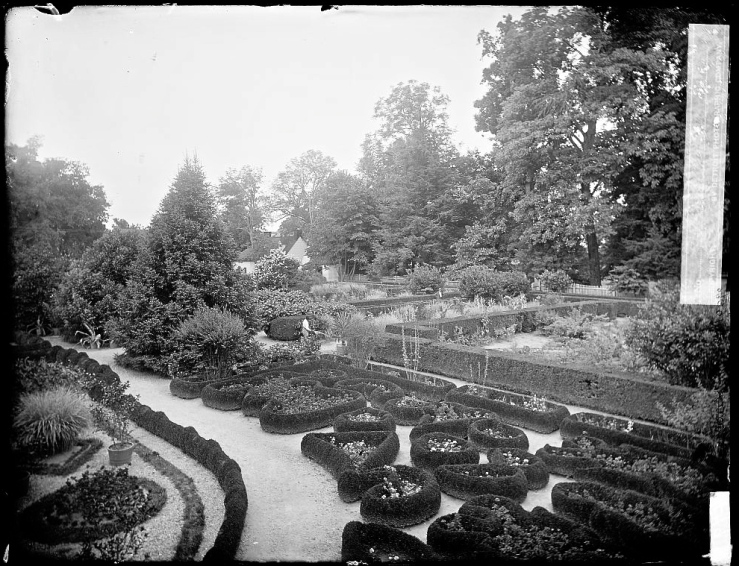 I love this 1902 photograph of the Upper Garden at George Washington’s home, Mount Vernon. It’s so high Colonial Revival.

Early American Gardens has a post this week,  “Mount Vernon after George Washington’s death,” with images from the 19th century.  While looking at them I remembered the picture above and the two below. 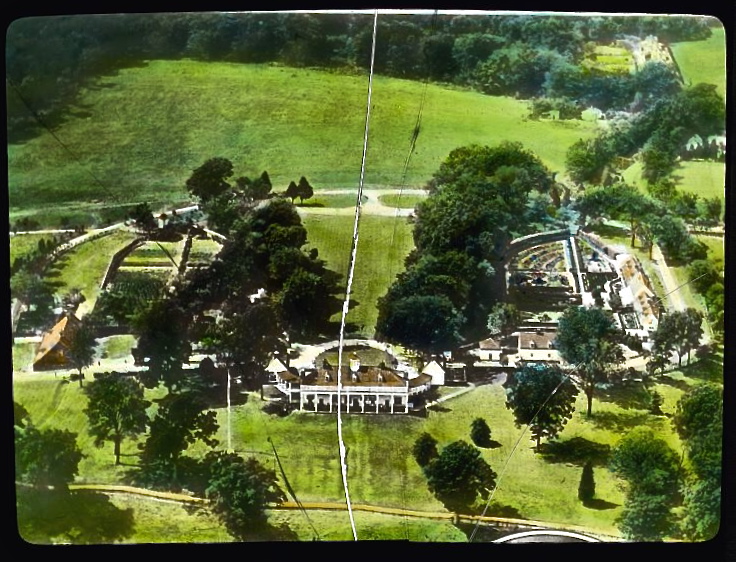 Above is a hand-colored slide from a 1929 aerial photo, part of the lantern slides collection of Frances Benjamin Johnston.  The Upper Garden is on the right side. 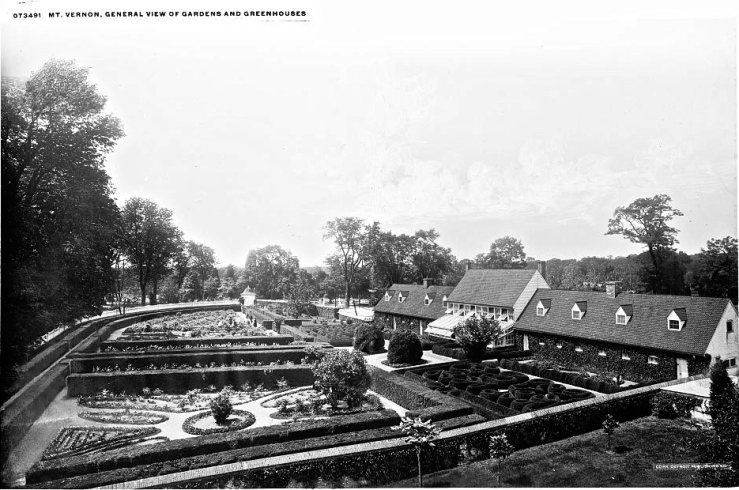 And here is a general view (c.1910 – 1920) of the the Upper Garden by the Detroit Publishing Co.  All three images above via the Library of Congress Prints and Photographs Division.

The 20th century photos are pretty, but they don’t accurately represent the Upper Garden of Washington’s time.  In the late 19th century, restorers thought that the boxwood parterres (many filled with hybrid tea roses) were original to Washington’s time, but research in the 1980s found that they were actually planted in the 1860s or 70s (although they may have been rooted from Washington’s boxwood).

The garden was substantially re-worked in 1985 (the greenhouse was restored in the 1950s), but such is the romantic power of a boxwood hedge that they were largely “kept in place by their own mythology and the mythology they supported of Washington as American royalty,” according to The History Blog, here.

By the early 2000s, the boxwoods were dying, so the Mount Vernon Ladies’ Association, which owns the estate, decided to make an extensive (six-year) archaeological dig on the site.  This culminated in a “new” (1780s) design in 2011.  The area now holds large open beds of vegetables and flowers.  They are bordered by low boxwood hedges and centered by a 10′ wide gravel walkway.

You can read about the restoration in this Washington Post article, here.  However, I really recommend watching this very interesting 30-minute C-Span video about the research and archaeology that informed it.

I’ve almost finished reading the excellent Gardens and Gardening in the Chesapeake, 1700 – 1805, by Barbara Wells Sarudy (aka Early American Gardens).  You can read its first chapter, about the 18th century garden of Annapolis, Maryland, craftsman William Faris, here.

For Anglophiles: thousands of aerial photos of Great Britain have recently been made available online; read about it here.

I recently found this 2010 (inside) art installation by Beilu Liu, which I think is just lovely, here.  It’s called “Red Thread Legend.”  (My Pinterest page — link on the right — is red today.)

In 2011, artist and former urban planner, Kathryn Clark, made a series of map quilts, shown here, representing neighborhoods that have had high foreclosure rates in recent years. Earlier this year, she gave an interesting interview with The Atlantic blog, Cities, here.

I also recently found the blog Miss Design Says, about “all good things Danish.”  It currently has a post about Rabalder Parken, a park that combines a street skate area  with an overflow water drainage system, here.

Of course I saw this on Pinterest: an umbrella that looks like a head of lettuce, here.  It’s from Japan, but the link will help you order it from other countries.

I liked this Q & A  information on rose hips in the New York Times,  here.  And I have recently been looking for some good flower frogs, and I found them here, from a tip from Gardenista.

Finally,  O-Dark-Thirty, the online literary journal of the Veterans Writing Project, launched in August.   The VWP is a 501(c)(3) non-profit based in Washington, D.C.  It provides no-cost writing seminars and workshops for veterans, service members, and military family members. Please visit them here.

9 thoughts on “Mount Vernon’s garden and a Wednesday miscellany”