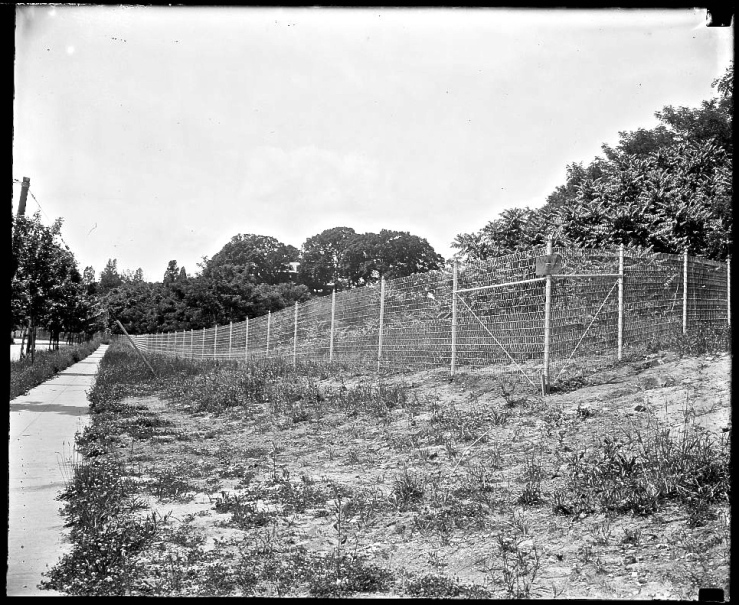 “In leaving for her new post as American Minister to Norway, Mrs J. Borden Harriman is not burning but leaving her fences behind her. The last time Mrs. Harriman was away from her Capitol home for any length of time she found a load of dirt from the excavation for the new home of the late Raymond T. Baker dumped on her front lawn upon her return. She sued for $23,000 but the case was settled out of court. This time she has had a high fence constructed around her property to prevent a recurrence of the same thing.”

Mrs. Harriman’s complaint said “that on the 22d of April, 1931, the defendants, ‘with force and arms, did break and enter into and upon the said ground of the plaintiff, and trod down, trampled upon, consumed, destroyed, and spoiled the grass, herbage, shrubbery, ornamental trees, then and there growing and being of great value,’ etc.”

Perhaps the fence should be even higher.

Photo by Harris & Ewing; both it and text in quotes via Library of Congress Prints and Photographs Division.  Mrs. Harriman’s home was at the intersection of Ridge and Reservoir Roads — I believe in the Pallisades neighborhood (although I haven’t found a Ridge Road that intersects with Reservoir).

Thanks to the blog Living in Kigali for including enclos*ure in their list of “Super Fabulous Rwanda-Related Websites.”

One thought on “You know there’s a story here”