Click on any thumbnail below to scroll through larger photos of a variety of garden and lawn parties.

The online National First Ladies Library describes Grace Coolidge as “bright, intelligent, witty, with a strong sense of humor.” Her Wikipedia entry says she was the most popular woman in Washington.

At the same party, Mrs. Coolidge with Prudence Prim, her white collie. The Coolidges had 4 cats, 7 birds, and 9 dogs.

Representative Edith N. Rogers and Carl Brunner at the same White House garden party (probably for disabled vets). Rep. Rogers looks quite chipper despite appearing to be in mourning for her husband, who died in 1925. The other lady (Mrs. Brunner?) is more serious and seems to have brought her bible (or phone book). All 3 photos by National Photo Company. 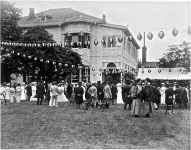 About the same time, Alice Roosevelt attended this garden party in Japan, given by the U.S. Ambassador.

1911 lawn party on Governor’s Island, N.Y. The event was annually sponsored by the Army Relief Society, which raised money for regular army widows and orphans.

Florence Kimball and her escort being offered food at a 1908 Governor’s Island lawn party. Both G.I. photos by Bains News Service. 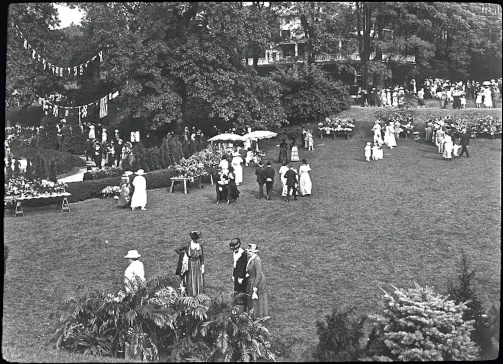 Garden party at the Hartsdale Train Station in the Bronx, Sept. 20, 1919. The event was “Floralia.” Photo by Bronx Parkway Commission. 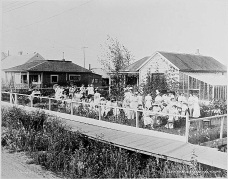 A Fairbanks, Alaska, party c. 1918. Note the raised wooden sidewalk and the greenhouse attached to the house. Fairbanks had only been founded in 1901. Photo by National Photo Company. 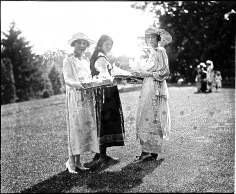 A 1920 lawn fete for Near East Relief. Twin Oaks was a 30-acre estate in Cleveland Park in Washington, D.C., built in 1888 by the first President of the National Geographic Society and owned at the time of this photo by his daughter, Grace.

These girls were performing at the same fete. The house still exists and has been owned by the ROC (Taiwan) since 1947. Photo by National Photo Company.

At the same party, the Japanese flower booth. Photo by National Photo Company. 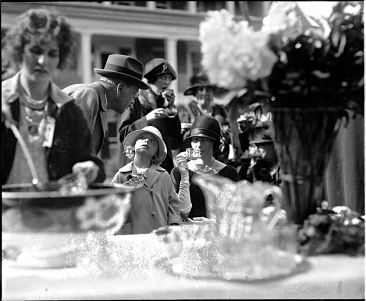 1925: The Countess Szechenyi and her daughter Sylvia appear in many LoC society event photos. The Countess was a Vanderbilt heiress, who married a Hungarian count, who was also Ambassador to the U.S. Sylvia also married a Hungarian count. She was the last member of the V. family to live at The Breakers at Newport, R.I. She died in 1998. I haven’t found the location of Mt. Alton. Photo by National Photo Company.

A tea party in “Plant Park”, which was an attraction of the Gilded Age Tampa Bay Hotel. The park and building still exist as part of the University of Tampa. There was a small zoo in the park, which may explain the posts (fence?) around the pond.

At the Mina House hotel in Cairo, Egypt, c. 1920s. Note the Great Pyramid in the upper right side.

A tea party for the Jerusalem YMCA after a tennis tournament, August 1939, by the American Colony of Jerusalem.

Garden party for the 60th Anniversary of the American Colony of Jerusalem, Sept. 25, 1941. The Colony had really disbanded by this time.

Sometimes a garden party can be for just two (or four). About 1900, photographer unknown.

7 thoughts on “Vintage landscape: what a lovely idea”