I’m afraid I’ve let all the work we’ve done on our Kigali garden recently move well ahead of writing posts about it.

We — the gardener, two temporary workers, and I — made some substantial changes during June.  So much so that we’re now taking a week  or so of relative rest before the gardener and I start phase two.  (When I got up in the middle of the night about a week ago, I thought I was going to die, my muscles were so sore.)

So while we pause, I’ll back up and give you some “before” pictures and a little site analysis.

(I’m going to use the present tense while describing the old garden features, so as not to give away the changes we’ve made).

This is a good-sized, “working” diplomatic garden that hosts two or three receptions or ceremonies a month.  It’s very pretty and lush, with mature trees and many flowering shrubs.  But it also has some problem areas — places where purpose is ill-defined, opportunities for drama or charm are missed, transition points are weak, and many plants are too old or badly pruned or overcrowded.

The first photo below shows the view when you enter the gate to the property: one end of the house, the circular driveway, and a semicircle of grass edged by day lilies and miniature roses. (If you look left, you see the back of the house and a parking area.) 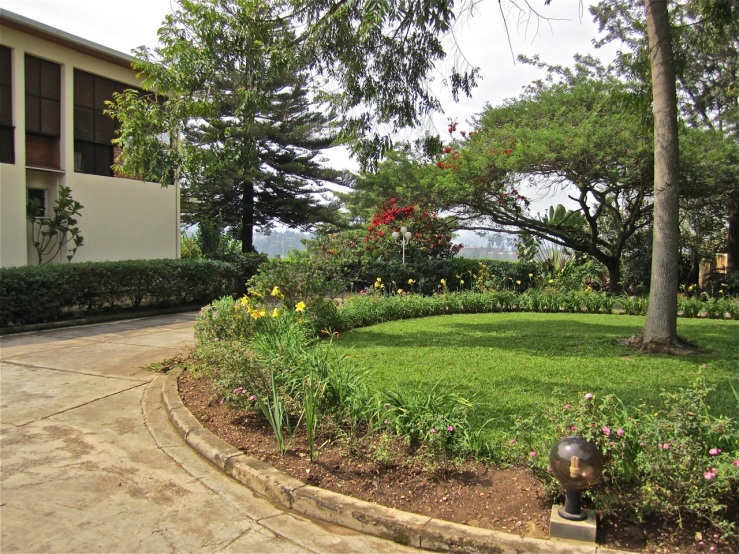 In the semi-circle, shown above and below, the miniature pink shrub roses (possibly “The Fairy” variety) are planted in a line along the curb, and the yellow day lilies are lined up right behind them.  I’m not fond of the yellow/pink combination, but my main concern is that the single-file arrangement  — the first thing you see when you walk or drive into the enclosure — is skimpy and makes a weak  impression.

Looking right across the semi-circle, below, you see a beautiful  spreading acacia tree, but its impact is obscured by the shrubs and plants growing along the edge of the drive.

If you slip in a small space between a couple of those shrubs, as in the photo below, you find an old stone path leading to a no-longer-used concrete flagpole base.  And to the left of the concrete base are steps to the long front lawn. 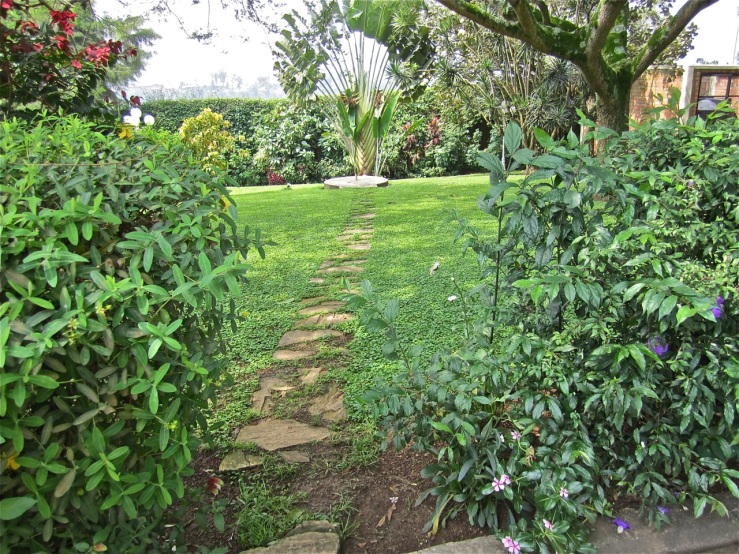 Below, the photo shows the side entrance to the front terrace.  (If you back up to the starting point in the first photo above, walk down the drive along the side of the house, you reach this point.)  This is where we welcome guests.  Because of the planting bed in the center, and the clipped hedges at the edge, the paved walkways only comfortably allow for two people to stand side by side.

The hedge is made up of plumbago, lantana and other flowering plants, but the blooms are mostly sheared off.   In center of the planting bed is a tall Norfolk pine and a rather skimpy assortment of small roses, asters (I think), lirope, coleus, and a bird of paradise.

Unfortunately, the tree is dying.

If you step through this area, you’ll be on a long terrace along the front of the house.  As you can see in the photo below, in  front of the terrace are two rows of (mostly) clipped shrubs and a path of grass between them.  Plumbago and jasmine are growing up the house columns.  The vines and shrubs attract colorful little birds right up to the terrace.  However, the vines on the backsides of the columns are bare and brown from constant shearing and a lack of light. 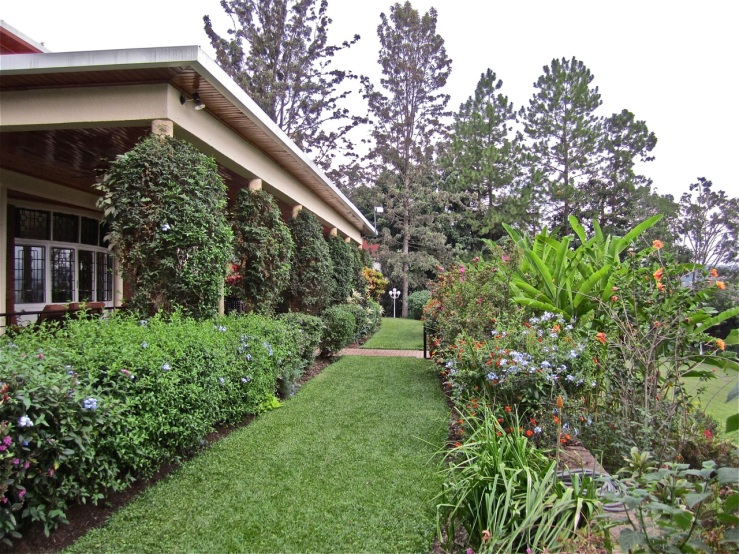 The shrubs right along the terrace make it feel closed in, and I believe that mosquitoes hide in there in the evening.

While the arrangement is rather pretty, the grass path serves little purpose — it’s mostly blocked by the shrubs on one end, and it’s too narrow for seating.  The tall plants on the right in the picture above — particularly the 6’+ lobster claws (Heliconia rostrata) — obscure the view of the hills and the city.

There are a lot of great plants in the beds on either side.  And I always imagine Alice running through some part of  Wonderland when I look down this side of the path (above). 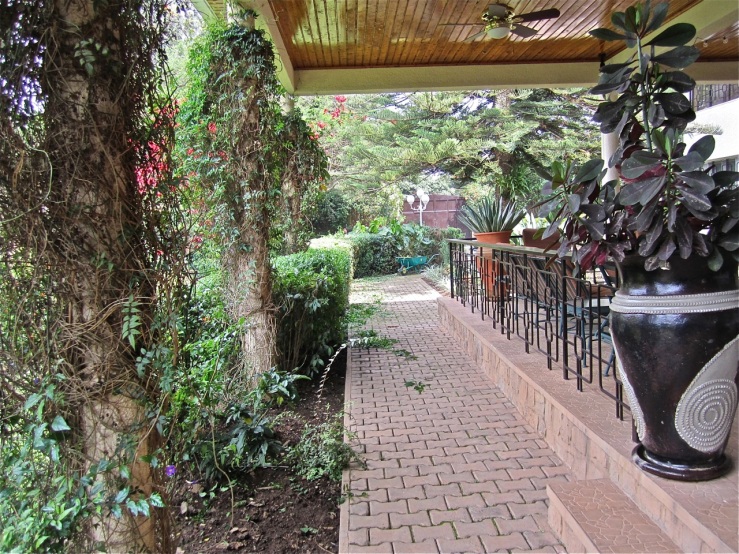 Unfortunately, the terrace side of this strip (above) gives me an unpleasant crowded feeling, and the leaves of the vines die off from lack of good light.

Above is the view from the center of the terrace.  It’s somewhat blocked by the tall lobster claws on either side of the steps.  Down those steps are two levels of stone retaining walls and then a long lawn.

Above is a view of the lawn from one end (at the steps just to the left of the flagpole base in the earlier picture).  When we entertain large groups, the embassy puts up one or two tents in the center of the lawn. 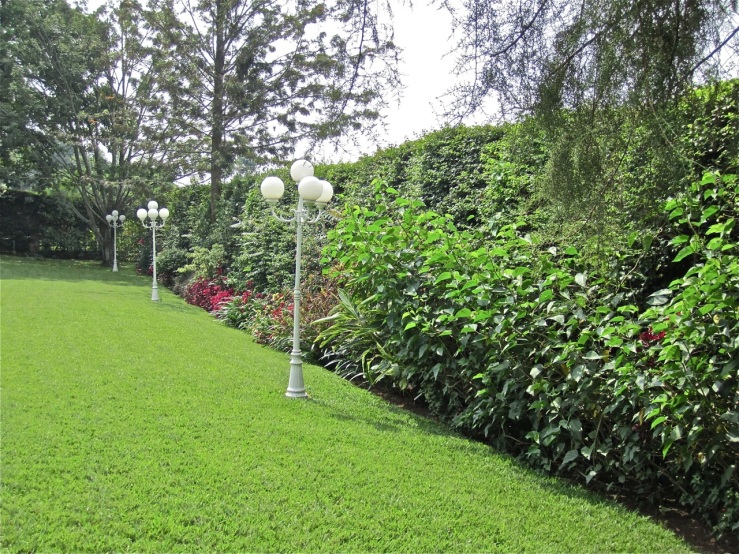 On the right side of the lawn, at the front of the property, there is a clipped bourgainvillea hedge and a variety of interesting shrubs and plants, all sharing a very narrow strip of ground.  The slight dip at the edge of the lawn makes it look like the plants in front are sliding under the hedge.

In the photo above, you can see how pretty the shrubs are, but again how little room they have.  Since this picture was taken, the gardener has cut these bushes along their sides to keep them from intruding onto the grass.  Now you see a lot of bare stems — not very attractive.

The white, curlicue, Victorian light posts in the above photos really bug me, I must admit, because, as you can see in the picture below, the lines of the house are attractively modern and simple.

Above is the view from the lawn at the bottom of the center terrace steps.  You can see, to the right and left, how tall and thick the lobster claws are. (Are you getting the idea that maybe something’s going to happen to those plants?)

You can also see from this photo how the two levels of stone retaining walls that branch out from either side are an important feature of this part of the garden.

The planting beds at the top of the lower retaining walls are full  of great plants, but it’s a real thicket in there.  I have sometimes found three shrubs growing out of the same 8″ spot of ground.  And this old croton (above) is so overgrown that it’s lost half its leaves.  And at its current height, you look up onto the undersides of the remaining leaves, rather than down onto the colorful tops.

Above, going back up to the terrace and walking its length to the opposite end of the house, the path to the side yard is almost blocked by a very large, very clipped shrub (also shown below).

Squeezing past the bush, you come to the side yard  and the other end of the house (below), which has a narrow planting strip along the sidewalk . . . 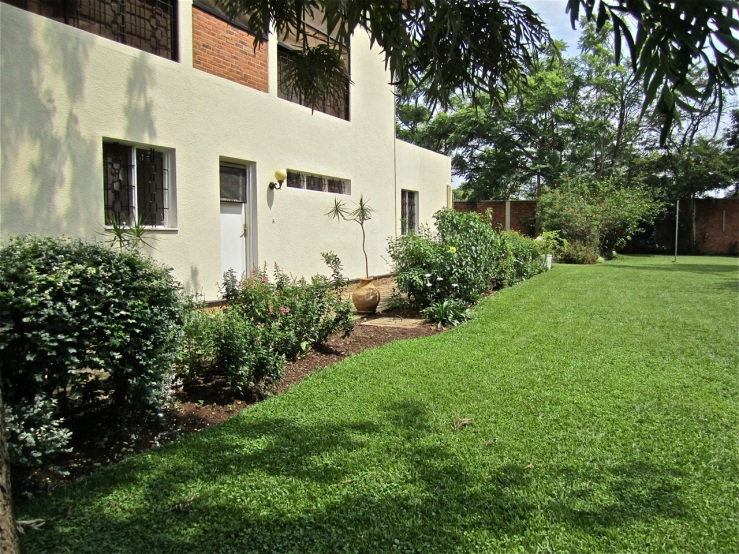 and, across from that (below), a large vegetable garden whose edges have become rather freeform over the years.  There’s a lot of sunny grassy space between these two beds, which isn’t needed for entertaining. 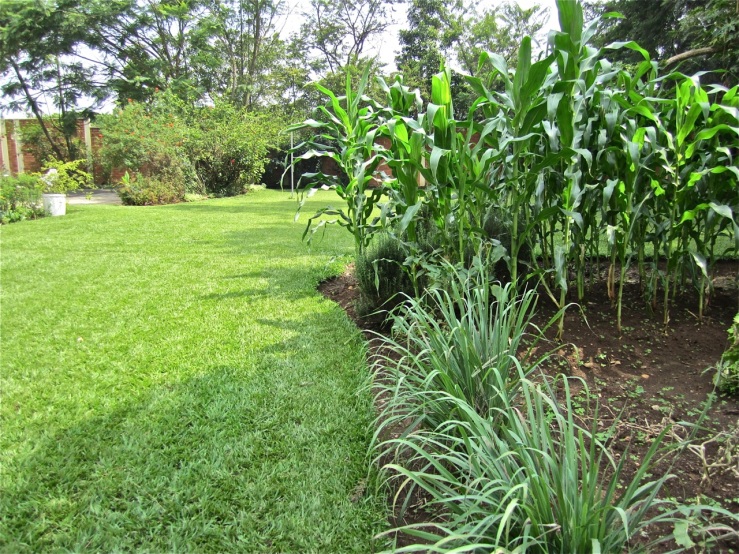 There are a number of potted plants in the garden, including these two (below), which have been left at the back of the house.  They hold burgundy cannas (which are breaking their pot) and bright variegated gingers, but almost no one sees them.  On the terrace, we also have variegated yuccas planted in very nice tall pots, but so deeply that only the ends of their squished up spiky leaves show (and they’re  a bit dangerous at upper-body level). 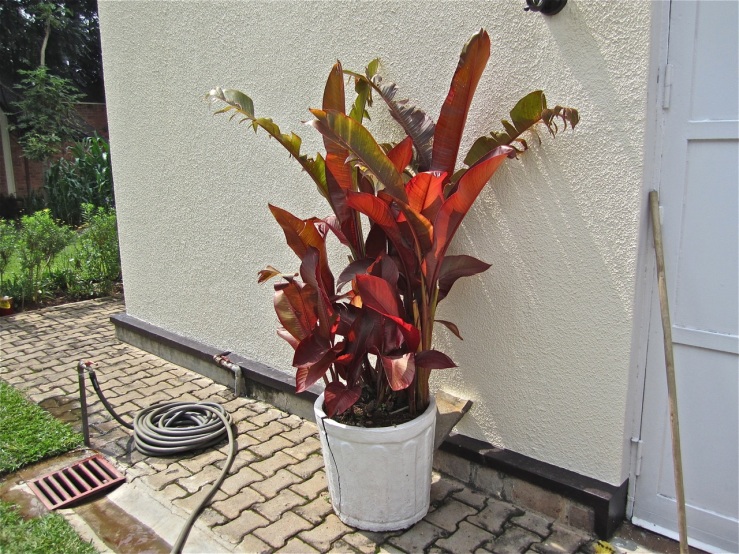 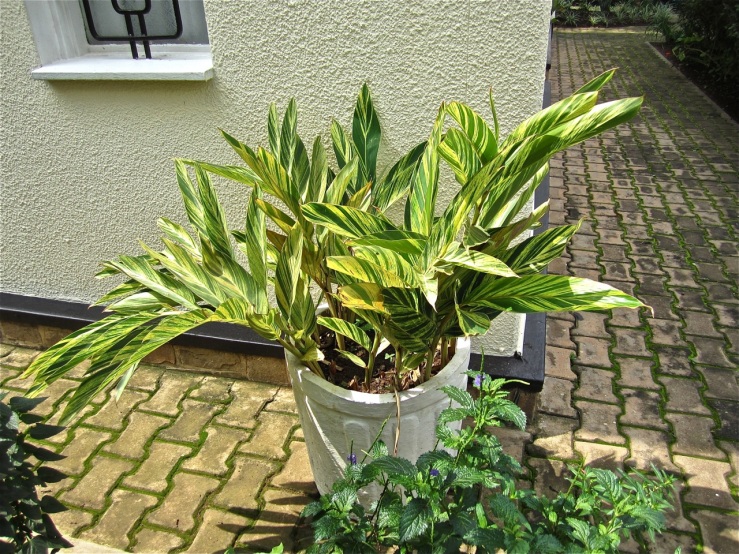 Soon: a concept and change.

10 thoughts on “Our garden: site analysis”