On July 4th, my husband and I walked home through Georgetown after lunch.  When we reached R Street, we decided  to cut through Montrose Park and then over behind Dumbarton Oaks.

This is how we came upon Dumbarton Oaks Park, a section of Rock Creek Park with an exceptional pedigree, but a difficult present existence.  It is an almost lost remnant of the Country Place Era of American garden design (1880 – 1940).

The Dumbarton Oaks garden, which was designed by Beatrix Farrand for Mildred and Robert Bliss, is famous, but the park behind it is far less known.  I had never heard of it — not from garden history classes nor during visits to the DO garden — until this April, when I received an e-mail about the launch of efforts of save it.

But the DO Park, also designed by Farrand, is on the National Register of Historic Places.  “To landscape historians,” writes Adrian Higgins of The Washington Post, “it is hallowed ground.”

In 1928, these 27 acres of former farmland became a naturalistic extension of the Bliss estate’s formal gardens.  A series of paths and meadows were composed along a small tributary of Rock Creek and planted out with drifts of native and exotic wildflowers, bulbs, and woodland shrubs.  Eighteen waterfall dams were built, as well as two arbors and several benches and footbridges — all in the rustic Arts and Crafts style.

In 1941, when Dumbarton Oaks was given to Harvard University, this part of the property went to the National Park Service.

Over time, however, it seems that the highly designed and delicately crafted landscape was just too much for the Park Service to handle.  Photos taken in the late 1980s show it in very bad condition.  Through the decades, there has been serious damage from runoff to the stream-edge areas, and invasive weeds and vines have smothered and pushed out Farrand’s trees and plants.

The formation of the Dumbarton Oaks Park Conservancy offers some hope for its restoration.  Headed by Rebecca Trafton, a garden designer and documentary maker, it is currently raising money and hopes to present a  work plan in October.

The DO Park is a remarkable place even now, and the strength of Farrand’s vision and of her artful use of materials still shines through.  The refrain “this is how it’s done” ran through my mind as we walked along.  If you visit Dumbarton Oaks, please walk down Lover’s Lane on its east side and take a look.

Click on any thumbnail in the gallery below to scroll through the enlarged photos.  The order follows a walk from one end of the path along the stream to the other.

Looking back to the Montrose Park entrance, lichen-covered stone.

Crossing the stream on a footbridge.

The stream was dammed to create waterfalls.

A memorial, although to what is lost. 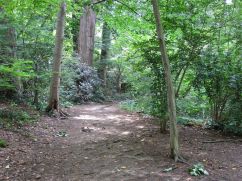 Rhododendron along the path. Farrand also had planted drifts of mountain laurel, but I didn’t see any remaining. 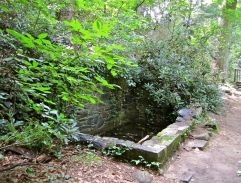 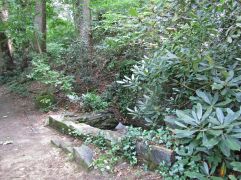 The stream, an unnamed tributary of Rock Creek Park. 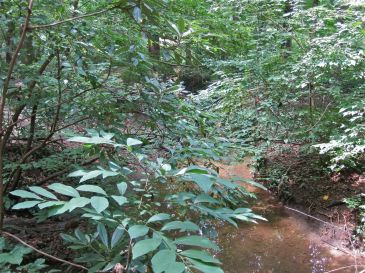 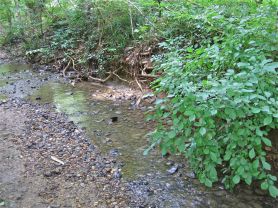 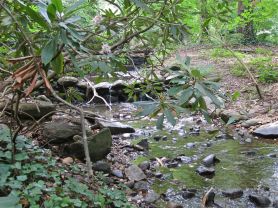 The stream and waterfalls. 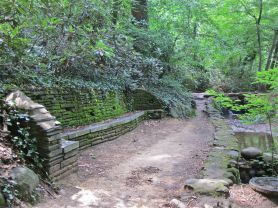 Stone bench. There used to be a rustic arbor over this long bench.

Photo of the long stone bench from the 1930s. Library of Congress, Historic American Buildings Survey.

A footbridge over a waterfall. 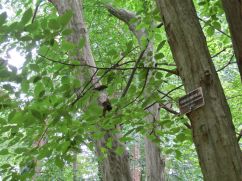 A bench in a meadow. 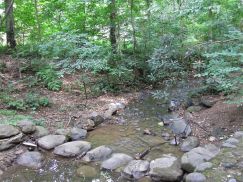 The back of the Georgetown Safeway parking garage, which overlooks the last part of the path. Porcelain berry vine and wild grape have taken over this area. 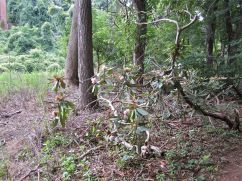 Old rhododendrons at the edge of the path.

Couple walking along the path.

Emerging from the park behind The British School on Wisconsin Avenue.