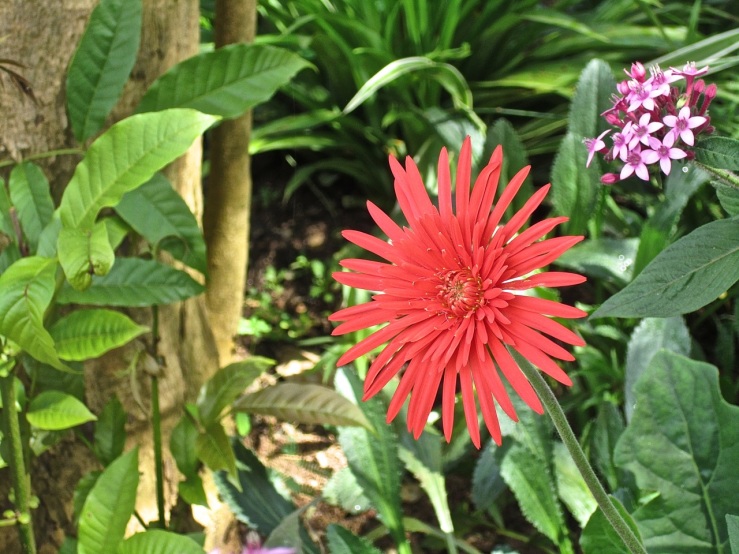 I went outside yesterday and discovered this single dark orange Gerbera daisy (probably Gerbera jamesonii or Transvaal daisy) in the back flower bed.

I was so pleased because I’ve been looking for more orange flowers to tie together two orange-flowered shrubs about 7′ apart in a mostly yellow section of the front garden (they are too large to move).  It divided into four little plants when I transplanted it.

We have a lot of coral pink Gerberas.  They bloom all the time and are a nice color for setting off flowers in red, orange and white, and violet and blue areas.

They are also a super-tough perennial for warm climates. Back in Washington, D.C., we mostly see them as cut flowers or potted plants sold in a grocery store. Gerberas are the fifth most-used cut flower in the world, according to Wikipedia.

A couple of weeks ago, I also found this in bloom in the back area:

Goldenrod (Solidago) — I immediately divided it and took some pieces to the yellow border in the front.

I had been watching the plant for a couple of months, thinking it was possibly a weed, but also thinking that it looked familiar. I should have recognized it — Solidago rugosa ‘Fireworks’ is one of my favorite  perennials.

There are over 100 species in the Solidago genus (both it and Gerbera are in the Asteraceae family), so I doubt I’ll identify it more specifically than ‘goldenrod.’  The plant is native to North America, although a few species are found in South America and Eurasia.

I searched for images of Fireworks on Google and found my own picture was number three on the page.  This was sort of thrilling (I lead a very quiet life.)  Strangely, pictures of our dog Sophie, were numbers seven and eight — I guess because I had put them in the same post. (There’s a nicer picture of the plant here.)

An interesting story from Wikipedia:

Inventor Thomas Edison experimented with goldenrod to produce rubber, which it contains naturally.  Edison created a fertilization and cultivation process to maximize the rubber content in each plant. His experiments produced a 12-foot-tall (3.7 m) plant that yielded as much as 12 percent rubber. The tires on the Model T given to him by his friend Henry Ford were made from goldenrod.

Extensive process development was conducted during World War II to commercialize goldenrod as a source of rubber.  The rubber is only contained in the leaves, not the stems or blooms. Typical rubber content of the leaves is 7 percent. The resulting rubber is of low molecular weight, resulting in an excessively tacky compound with poor tensile properties.

David Montgomery of The Washington Post has a sad story today about the elimination of “Ye Olde Yule Log” from this year’s events on the Ellipse (in front of the White House):

For more than 50 years, it was one of the quirky miracles of holiday Washington.  Groundskeepers stoked the fire around the clock. They used a forklift to feed it giant stumps and trunks from trees that had been marked as “hazardous” and culled from national parks in the region. Tourists and residents would gather around the mesmerizing inferno, sharing stories with strangers, feeling uplifted as much by the smoky, sparky nostalgia of it all as by the sheer unlikeliness of such a scene in this locked-down, plugged-in world.

The National Park Service has a contact page here, by the way.

If your potted poinsettias are already getting on your nerves, you may want to cut the “flowers” (I know — bracts) to arrange in a vase.  Here’s an article from The Telegraph on getting them to last.

*by Ian Parks, from “Goldenrod“