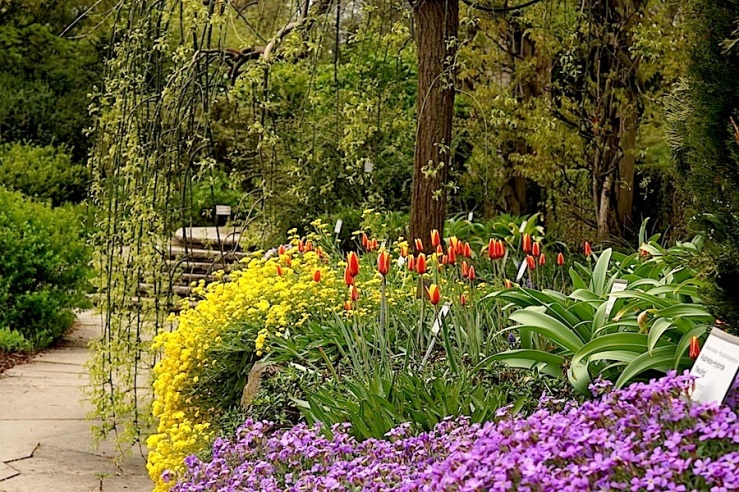 I went over to the University of Hohenheim’s Spielhaus garden for the first time in months yesterday to see what was blooming in mid April.  The cherry trees that were so amazing this time last year had finished and the magnolias were also winding down.  The perennial beds were still pretty subdued, except for this very nice bit just below the terrace and wisteria arbor. 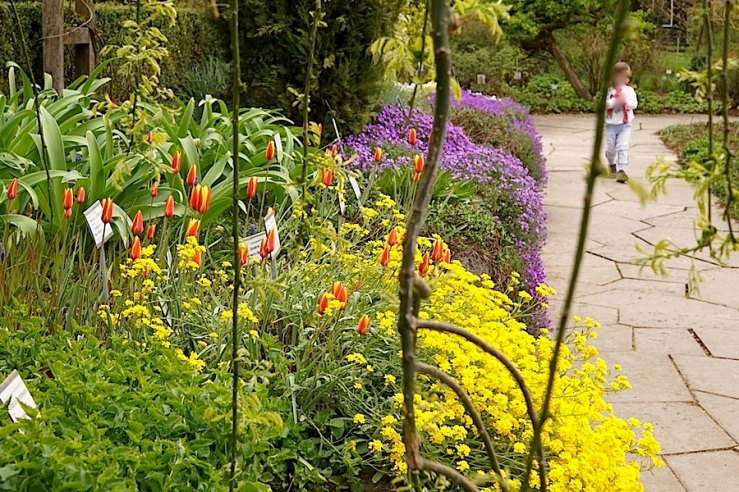 I thought this combination was great: Tulipa clusiana ‘Tubergen’s Gem’ and yellow Aurinia saxatilis ‘Compactum’. The little weeping tree above them is Sophora japonica ‘Pendula’. 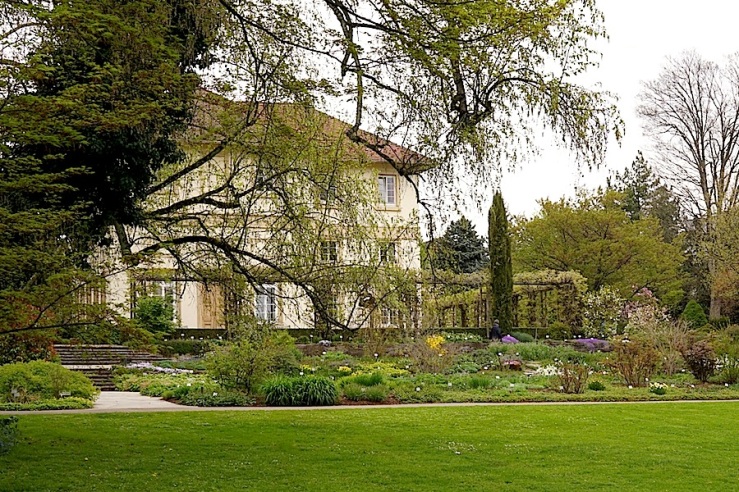 The Spielhaus (play house) was built in the 1780s for Grand Duke Carl Eugen von Württemberg and Franziska von Hohenheim, his mistress and then morganatic wife. It originally only had one floor and was one of about 60 folly-type structures in their “English garden” of Hohenheim Palace.

In another part of the Spielhaus garden, these small tulips were really sweet.

I also loved the Tulipa sylvestris, although I didn’t take a very good picture of them.

I like the way they all turn in more or less the same direction.

To see the mid-April flowers of other garden bloggers, please visit Carol at May Dreams Gardens.

Near University of Hohenheim, Summer 2016.

I want to bring you a little late summer update on this garden.

I started out in March meaning to track the flowers of the Spielhaus (playhouse) perennial garden at the University of Hohenheim for this year’s GB Bloom Days. However, travel, gloomy weather, and hurting feet have interfered, and I haven’t posted an update since May.

I did pay a visit this week, however, on Tuesday evening, and there was lots of color.

Above, American Rudbeckia hirta or Black-eyed Susans draw the eye, paired with a red cultivar of Ricinus communes, and Coreopsis on the other side of the path.

The obelisk in the background memorializes Duke Carl Eugen von Württemberg and Franziska von Hohenheim. They built Hohenheim Palace (now a  University building) and the English landscape-style garden/arboretum around it (now the University’s botanical garden).

Franziska was first the king’s mistress, then his morganatic wife.  The main palace building was barely finished when he died.  The family then pressured her into giving up Hohenheim for another estate.

Above: the Rudbeckia and white Oenothera lindheimeri (gaura). 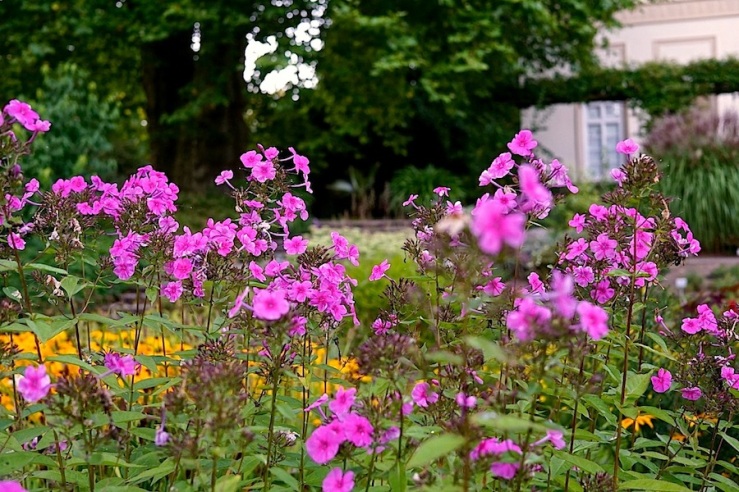 This pink phlox has a beautiful scent, but it has grown up over its label, so I can’t tell you the variety. 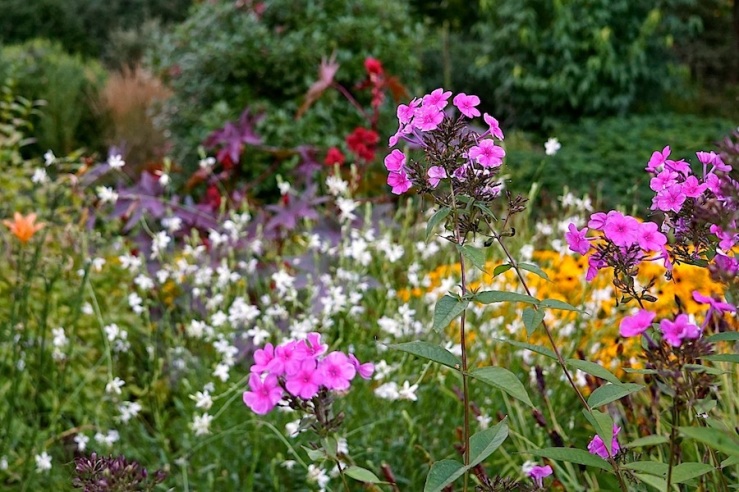 Above: with the red caster bean plant behind it.

The garden is roughly a rectangle with a bit of slope, set in front of the Spielhaus terrace. Narrow stone paths run through it lengthwise.

I don’t have the name of the species of the Panicum grass on the left above. The smoke bush on the right of the path is Cotinus coggygria ‘Young Lady’.

Above: tree peonies on the left, Agapanthus on the right.

Above: the center area.

I particularly like the garden’s layout. And the display of plants is very popular with the neighborhood.  It’s rare that I get it almost to myself.

Above and below: heleniums in front of the terrace — unfortunately, the label was hidden.

Above and the two photos below: looking across the garden from the Spielhaus terrace — left to right. (That’s another — taller and fuller — pink phlox on the left.) 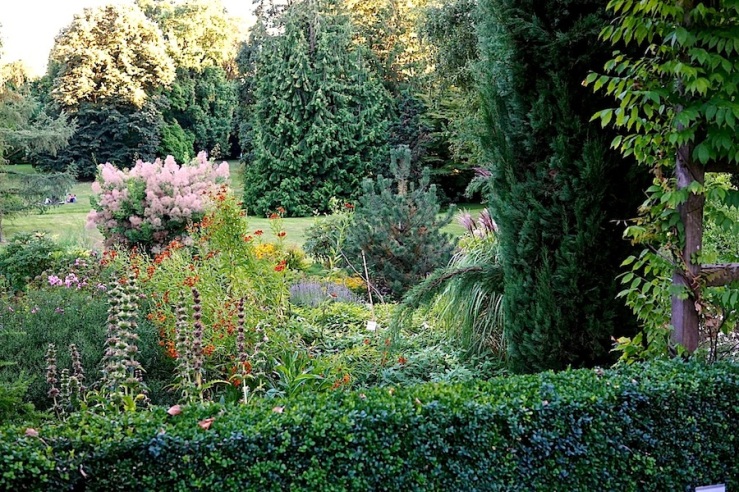 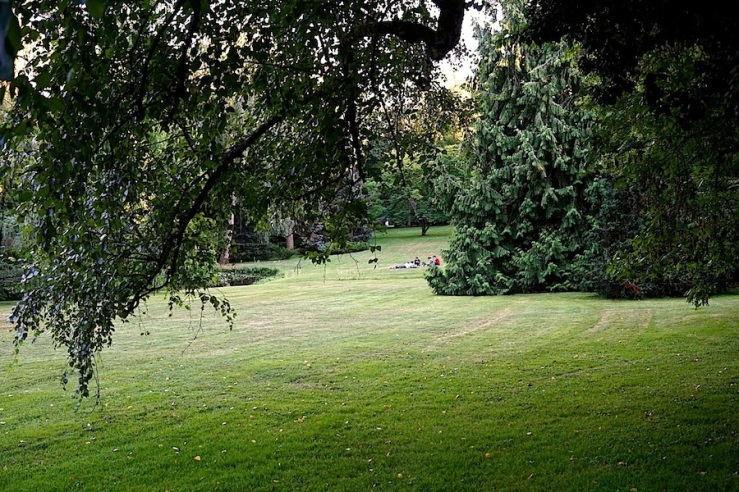 Above: Just beyond the Spielhaus area, the trees, pond (left), and lawn of Carl Eugen’s and Franziska’s landscape garden.

Throughout this summer, the University has opened one room inside the Speilhaus on weekend afternoons.  If you click on ‘Continue reading’ below and then on any of the thumbnail images, you can see some snapshots that I took in late July.  The room holds a scale model of the palace grounds in Carl Eugen’s time, when there were about 60 folly-type buildings.  Today, only the Spielhaus and one other remain.

END_OF_DOCUMENT_TOKEN_TO_BE_REPLACED

— Karen Volkman, from “May“

The Chinese tree peonies are definitely the stars this month in the Speilhaus garden of the University of Hohenheim.

I took these photos yesterday evening.

The garden has around ten mature specimens.

Unfortunately, we had several days of rain last week, and the blooms were not at their best.

The fern leaf peony shown above was new to me.

Beyond the peony bed, I liked the combination, above and below, of light-purple geraniums and orange euphorbias.

Nearby was a planting of bearded iris. 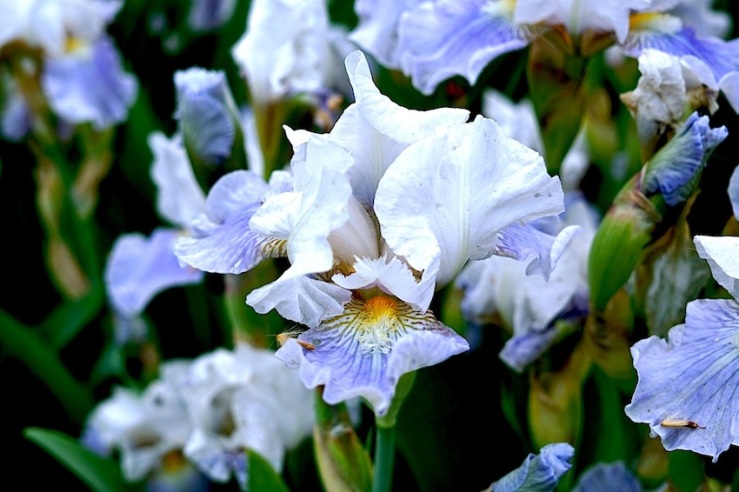 In the photo above, the bright yellow at the top, just below the arbor, is mountain goldenbanner, which is native to the western United States.

White asphodel  — “that greeny flower” — was also blooming in the garden. 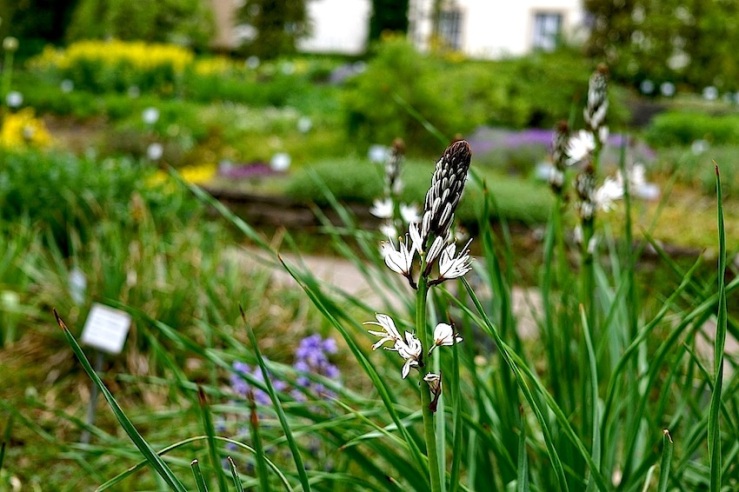 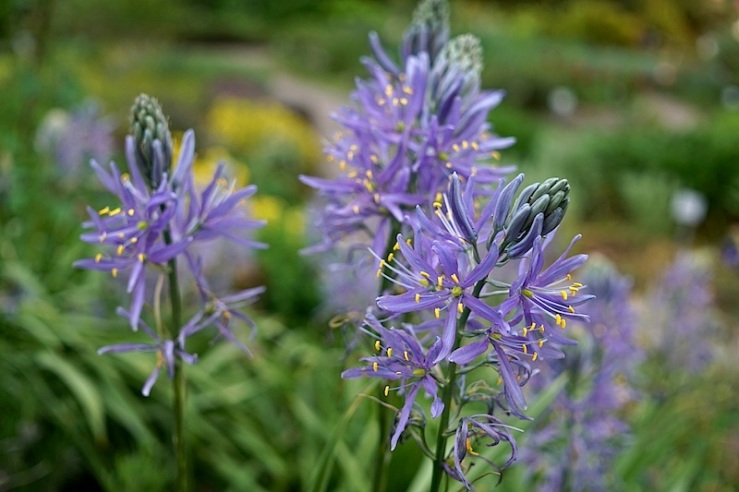 The pretty blue-violet flower above was close by. It’s a Camassia, a North American native in the asparagus family (see the comments below).

Looking south across the garden from behind the wisteria arbor, you can see the row of tree peonies.  In the lower right-hand corner is a planting of yellow asphodel or king’s spear. 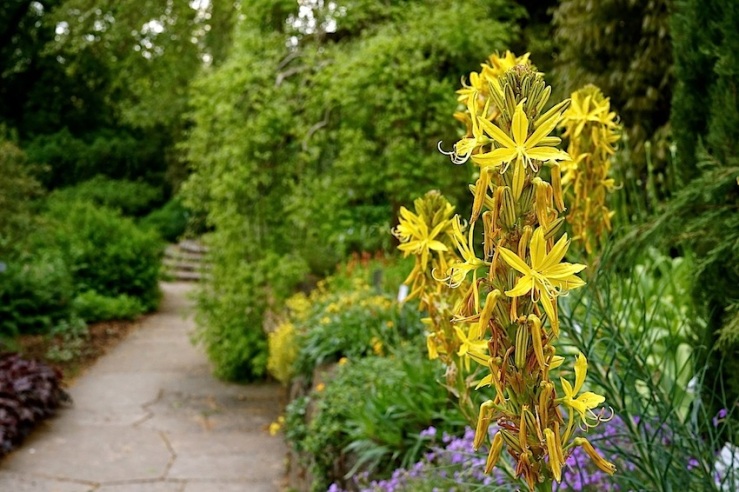 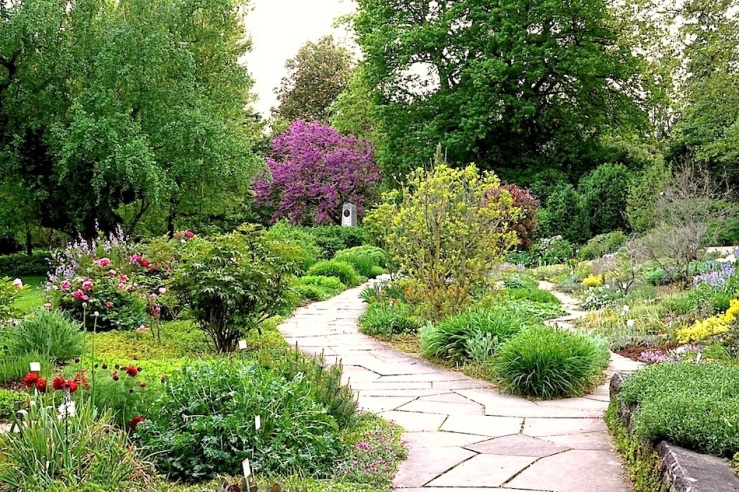 Looking across the garden from the east to the west, a beautiful pink blooming Judas tree draws the eye. 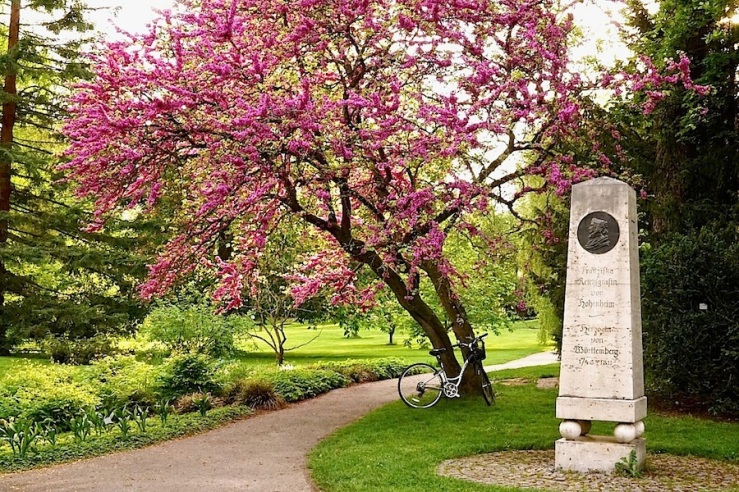 The tree is native to Southern Europe and Western Asia. 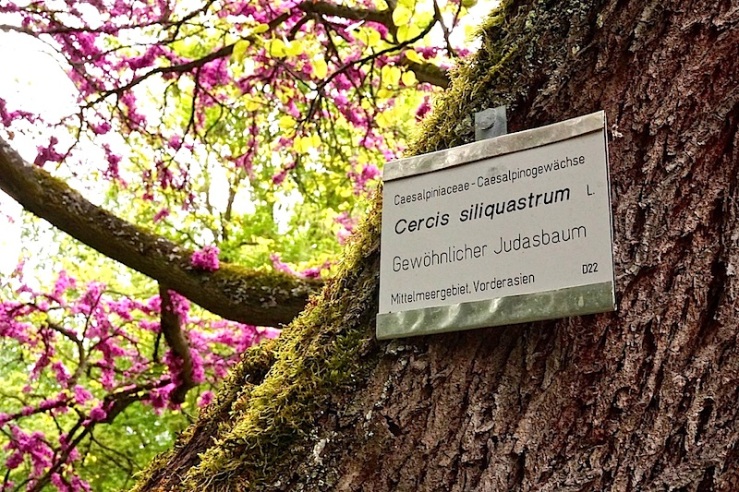 At the other side of the garden a Lithospermum purpurocaeruleum or purple gromwell drapes over the steps. The flowers emerge purple reddish and then mature to deep blue.

To see what’s blooming today for other garden bloggers, please visit Carol at May Dreams Gardens.