Arthur Peck was a Professor of Landscape Architecture at the Oregon Agricultural College from 1908 to 1948. During his long career, he created a teaching library of 24 boxes of glass lantern slides — now in OSU’s archives.

Does anyone know if this gate still exists in the Gardens?

Walking along the Book Hill section of Wisconsin Avenue in Georgetown, I crossed the street to take a few pictures of this arrangement.  It wins my own “best in mums and sweet potato vines” award.  (There’s a little English ivy in there too.) 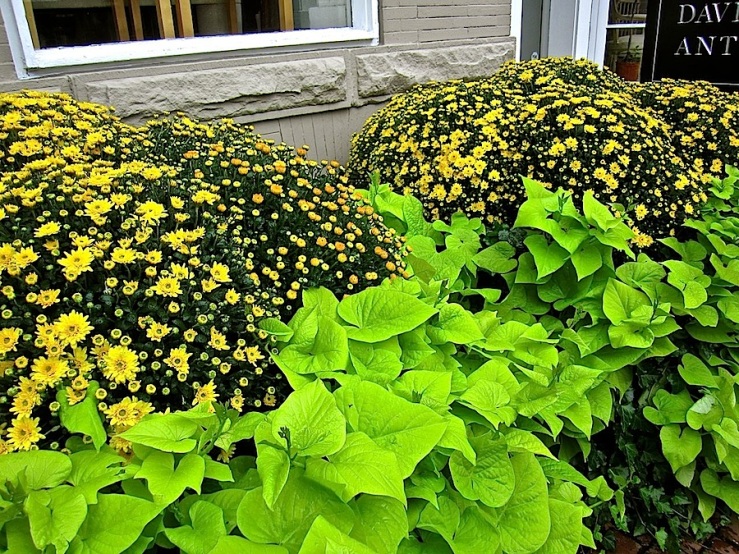 It’s appropriately in front of an antiques shop that sells mid-century modern furniture.

I also liked this planter made from old roof tiles at Marston-Luce a few doors down.

And I love the frog.

It takes a calendar one damp day to declare fall,
weeks of dying mums to second the motion.

This park was not located in the present-day upper-northwest neighborhood known as Van Ness.  The photo was taken in an area southwest of the White House near the corner of C and 18th Sts., N.W. — which was then known informally as “Van Ness Park.”

According to the Library’s notation on the photo, the building that can be seen in the middle of the far right side (above the man’s legs) is a “dependency  of Van Ness Mansion.”

Is anything more poignant than an old graveyard?

Mt. Zion Cemetery is tucked behind the apartment buildings and townhouses of the 2500 block of Q Street, NW, at the edge of Georgetown.  I often pass it on my bus ride home. On Wednesday, as I was walking home after the earthquake, I stopped to take a closer look.

The burial ground covers about 3 acres.   Many of the headstones have fallen or have been moved over time and are now consolidated into a few groupings.  The grass is neatly cut and trimmed around the stones, but there are no flowers or other plantings.   The woods of the Rock Creek Park trail surround the cemetery to the north and east.

What I suspected as I looked around — later confirmed by some online research — was that Mt. Zion was an old African-American cemetery, a reminder of the time (from the 1700s until the 1950s) when Georgetown had a large Black population.

Beginning in 1809, the cemetery’s western side was used by the Mongomery Street Church for the burials of its white members and their slaves, as well as of free African-American members.  It was known as the Old Methodist Burying Ground, and its largest monument marks the graves of the white Beck and Doughty families.  It was a biracial cemetery for a biracial (but not equal status) church while slaves were still being sold in Georgetown.

Old Methodist fell into disuse after Oak Hill Cemetery, located just to the west and north, was founded in 1849.  In 1879, the plot was leased for 99 years by Mt. Zion Methodist Church, the oldest African-American church in Washington.

The east side of the cemetery had already been purchased in 1842 by a local cooperative benevolent association of Black women and had become the Female Union Band Graveyard for the burial of free Blacks.

For decades, both cemeteries were well maintained, but eventually lack of funds led to disrepair, and the last burials were held in 1950.

In the late 1960s, the cemeteries were threatened with removal of the graves for development.  Various local groups and individuals worked together to save them, and, in 1975, they were declared a Historical Landmark of Washington, D.C., and listed on the National Register of Historic Places.

There’s a complete history of Mt. Zion Cemetery  by Pauline Gaskins Mitchell in the appendix of the 1991 book Black Georgetown Remembered, which can be read at this link.  The complete book can be purchased at Amazon.

On Friday, I visited Tudor Place, a 200-year-old estate in Georgetown built by Martha Custis Peter, the granddaughter of Martha Washington, and her husband.

I took many photos (I take full advantage of my memory card), and I want to write a post about the whole garden, but today, I thought I would start with some pictures of the property’s remarkable tulip poplar tree.

Located on the south-side lawn, the tree was possibly there when the Peters arrived.  It is now 20′ in circumference and over 100′  tall.  In 2002, it was designated the “Millenium Landmark Tree” for the District of Columbia by the America the Beautiful Fund.

Here are also some photos of a small “grove” of very large, very old boxwoods, also on the south lawn, which I thought were almost other-world-like from the inside.