Here are some mid-month pictures of our shaggy backyard on one side. (Click on any thumbnail image below to enlarge it.) 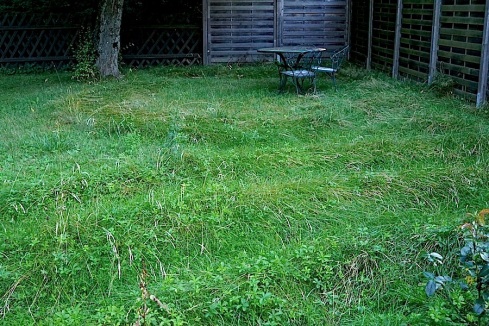 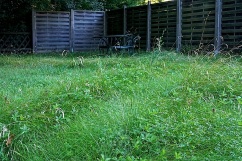 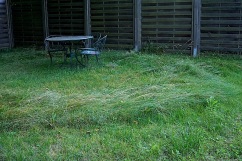 The pattern that I cut in the grass in May has blurred quite a bit, but I still enjoy it, especially in the morning light. 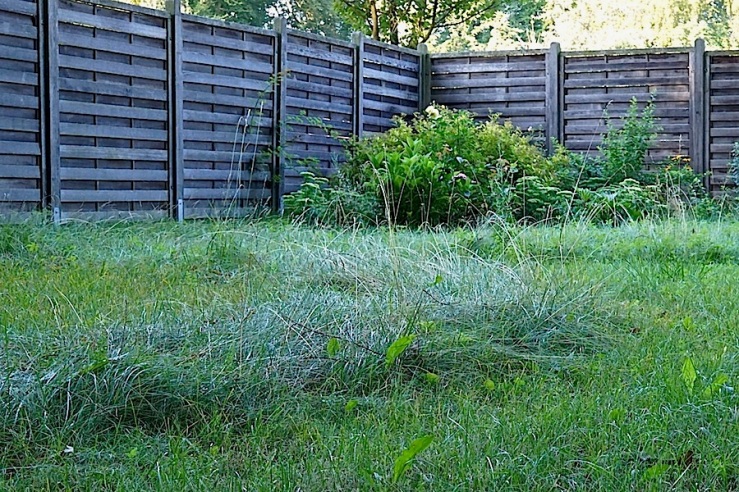 Our little corner bean-shaped flower bed has produced a surprising number of blooms this summer, considering that I had pretty much written it off last fall and had started using it as a compost pile. I thought this would kill off everything but the golden spirea and the “Fairy” rose, and then I could start over with better ground. 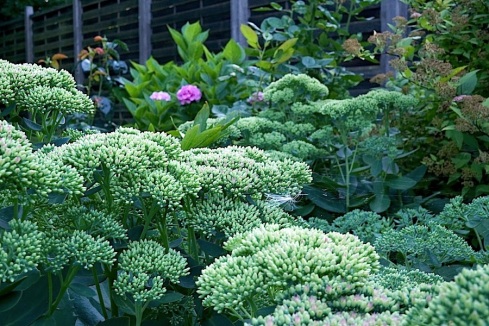 The ‘Autumn Joy’ sedum is just about to go pink. 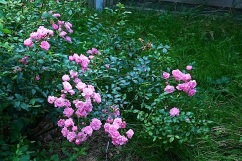 The little ‘Fairy’ rose started slowly but is now covered in blooms. 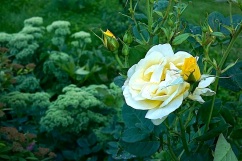 This yellow rosebush has filled out several bouquets this summer. 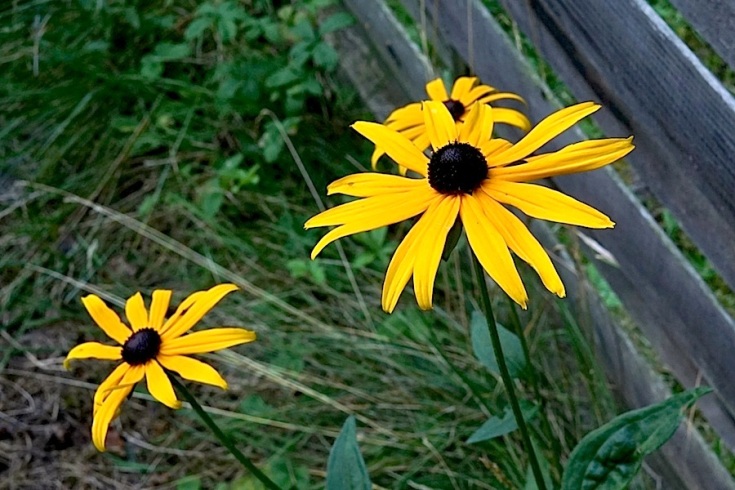 Instead, the previously sickly looking hydrangea, hybrid tea roses, and sedums seem to like growing under at least 3″ to 6″ of half-rotted leaves and grass clippings (and some coffee grounds).  I did smother a lot of weeds, but I don’t know what has happened to the mice that were living there too.

My plan to follow the Spielhaus Garden this year for Bloom Days and Foliage Follow Ups has not worked out very well due to travel, rainy weather, and a sometimes hurting foot — with surgery planned in a few weeks — but I hope I can get over there sometime this month and bring you an update.

Thanks to Pam at Digging for hosting Garden Bloggers’ Foliage Follow Up on the 16th of every month. And to see the mid-month flowers of other garden bloggers, please visit Carol at May Dreams Gardens.

First, let me give you a very quick, belated GB Bloom Day.  I was too wiped out to post yesterday.  I spend most of the day transplanting some shrubs and a bunch of Gerbera daisies and asters.  They needed dividing, and it was fiddily work pulling apart all the little roots.  And there seemed to be a battalion of ants everywhere I wanted to put them. 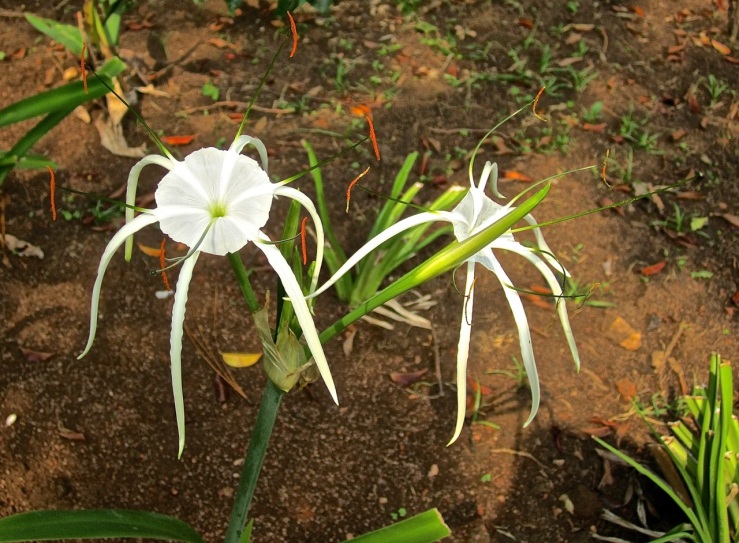 In the last month, as we’ve been renovating the garden, we’ve pulled out about 50 of these beach spiderlilies (Hymenocallis littoralis) from under old bushes and moved them to the front of the newly widened planting beds along the front lawn. They started blooming right away, although they’re a bit sad, since we cut off their leaves as we set them out.

Beach spiderlilies are native to southern Mexico, the west coast of Florida, and Central America, but somehow they made it to Rwanda, where they’re a common garden flower.

Now on to foliage:  the little creeping plant below is a real lifesaver here where you can’t buy that nice bagged mulch to cover all the bare dirt in a newly planted area. I don’t know its name, but we had it in Niger as well. It may be a sedum. 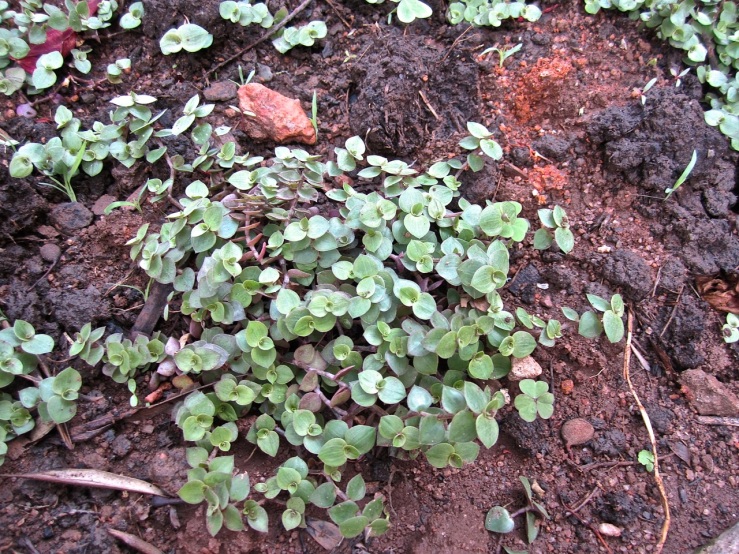 It’s very shallow-rooted, so it’s easy to scoop up a handful, tease it apart a little, and then press it into loose soil under taller plants that need some time to fill out. 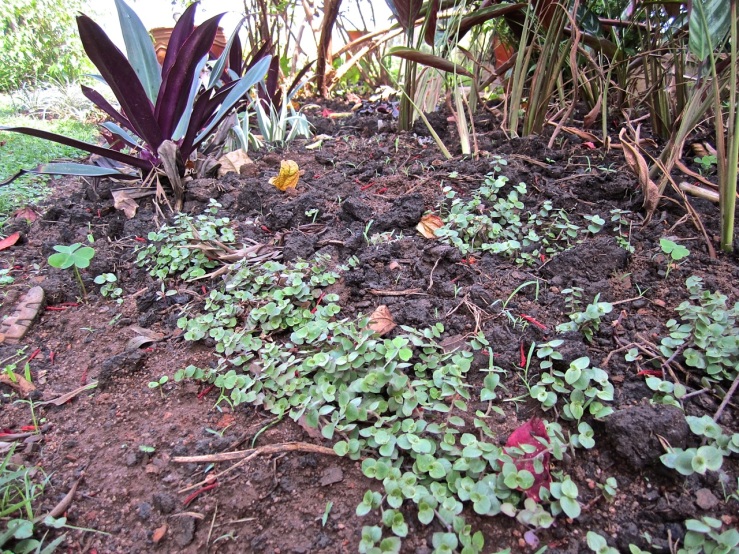 It’s grow-your-own mulch. It spreads quickly and can actually get out of hand, but I’ll always be tearing off the overflow for another spot. Or just tossing it — grow-your-own compost too.

In Washington, D.C., I had a spreading stonecrop sedum that served much the same purpose.

This month, I’ve also been pulling various begonias out of pots and re-planting them in semi-shade as ground cover.  They won’t spread as fast as the sedum, but they should make a nice tapestry eventually. 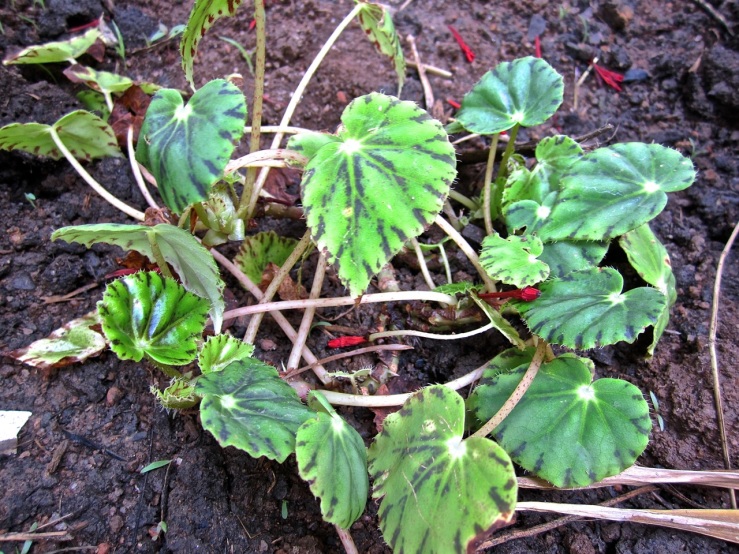 I’m not going to try to name these varieties. 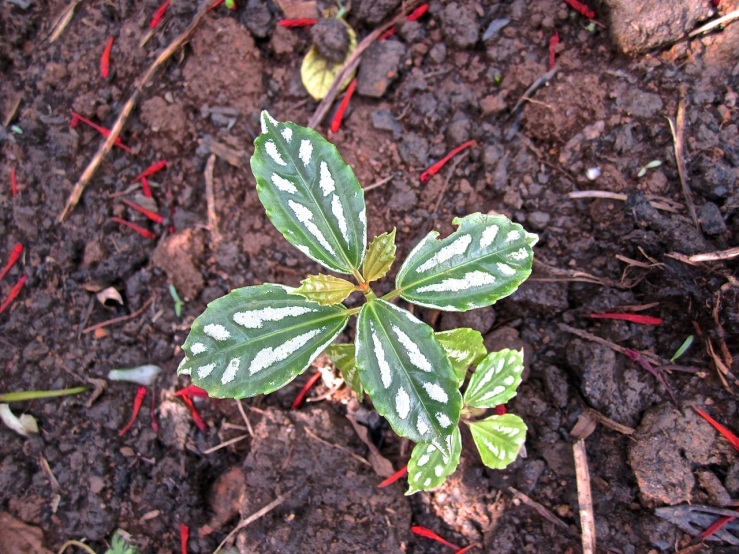 I think there as many different types of begonias as daylilies. 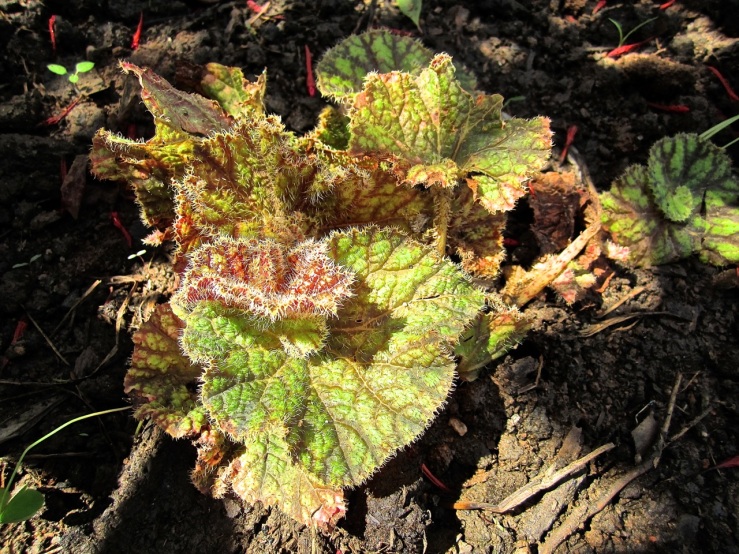 Below is great spreading plant for which I don’t yet have a name.  I found it behind the back parking area, hidden by the curb.  I’ve been dividing and planting it everywhere. 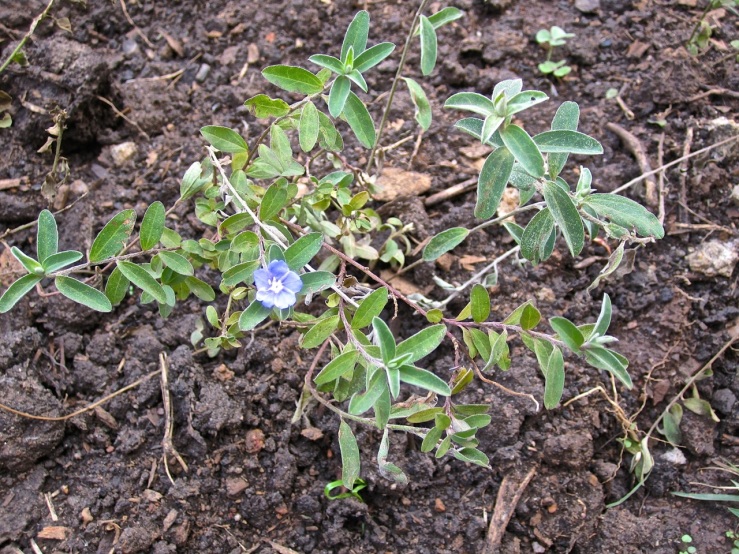 It has true blue flowers. 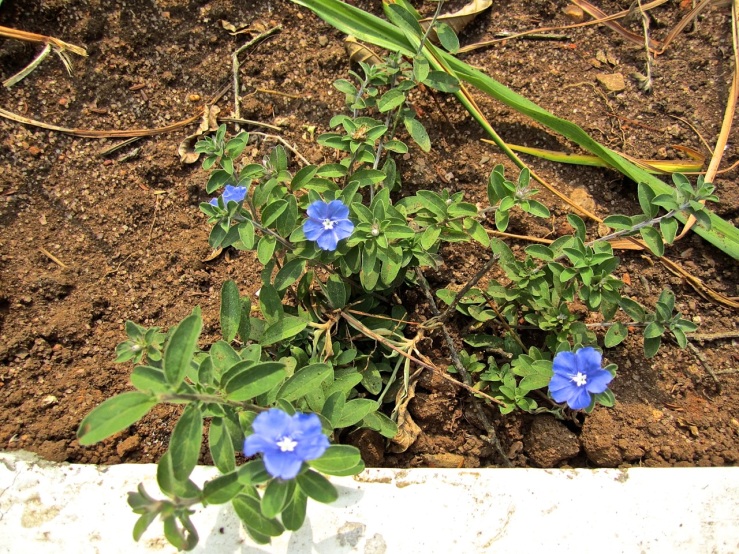 I’m not really a pots person.  In the last couple of months, I’ve mostly been removing the plants from a lot of the old pots that I’ve found all around the house and putting them in the ground. However, I did recently create this rather pitiful arrangement. 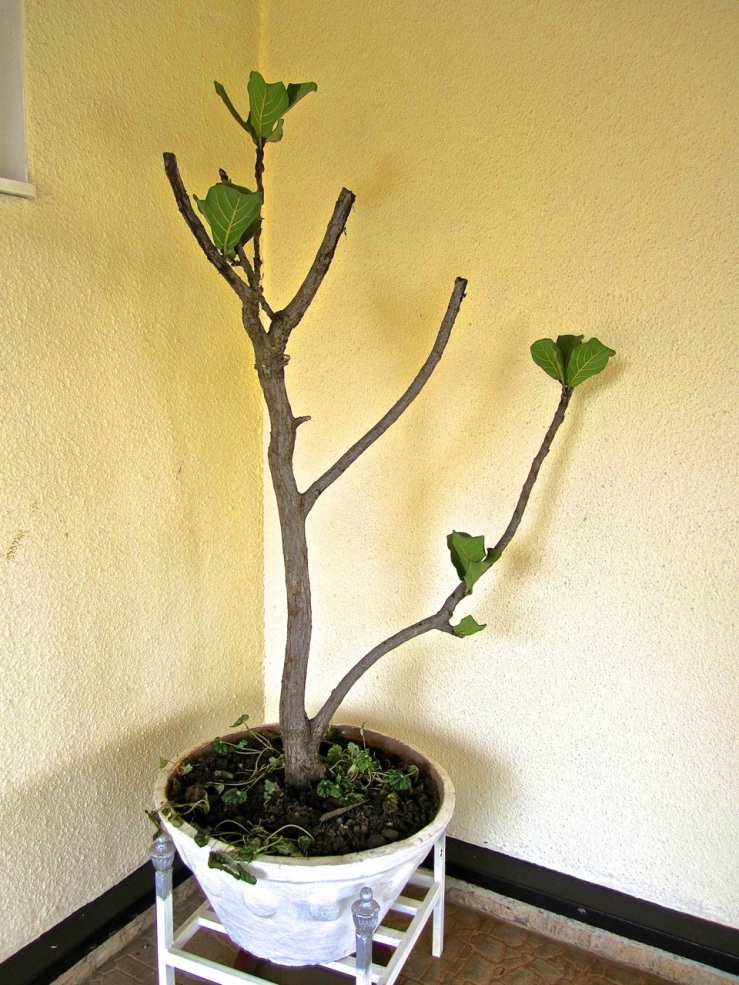 The tree — one of those big-leafed Ficus that you see in chic rooms in House Beautiful — was in another pot at the side of the house, baking in full sun. We pulled it out and pruned its roots and top.  Then, we put it in this prettier pot in the bright shade of the terrace, underplanted with the little round-leafed begonia shown above.

I’ve got my fingers crossed that it will eventually put out new leaves. [UPDATE: It recovered beautifully.]

To see what’s blooming in other garden bloggers’ gardens, check out May Dreams Gardens, and thanks to Pam at Digging for hosting Garden Bloggers’ Foliage Follow Up the 16th of every month.