This park was not located in the present-day neighborhood known as Van Ness.  The photo was taken in an area southwest of the White House near the corner of C and 18th Sts., N.W. — which was then known informally as “Van Ness Park.”

According to the Library’s notation on the photo, the building that can be seen in the middle of the far right side (above the man’s legs) is a “dependency of Van Ness Mansion.”

This was the front porch of “The Firs” in New Baltimore, Michigan, between 1901 and 1910.* At that time, it was a summer boarding house.

Although the ladies above look calm enough, throughout the 20th century — and up until the house was torn down in 2005 — many residents, visitors, and trespassers reported weird phenomena there.

Lights flickered, dishes flew off the table, strange voices were heard, and invisible fingers stroked girls’ hair. Ghostly figures were sometimes seen — particularly those of a young woman, an older man, and a child playing in the yard — or so ’twas said.

The residence was first known as Hatheway House, for Gilbert Hatheway, a businessman who built it about 1860.

Mabel was only twenty at the time of her demise and had married a man from another town just three months earlier. Local legend has her being killed from a fall down the Hatheway House stairs.

One account of the alleged incident notes that her father, irritable from chronic pain, was also unhappy with her choice of husband; another brings up an older cousin with anger management issues. In at least one version of Mabel’s slight history, she is mentally ill.

In the late 1800s, the Hatheway family moved out of the house, and it became The Firs.

About the same time, or perhaps later during the WWI years, the west side of the building was turned into a small hospital, run by Dr. Virginia French.  It was never a home for the insane, although that was the creepier story often passed down. 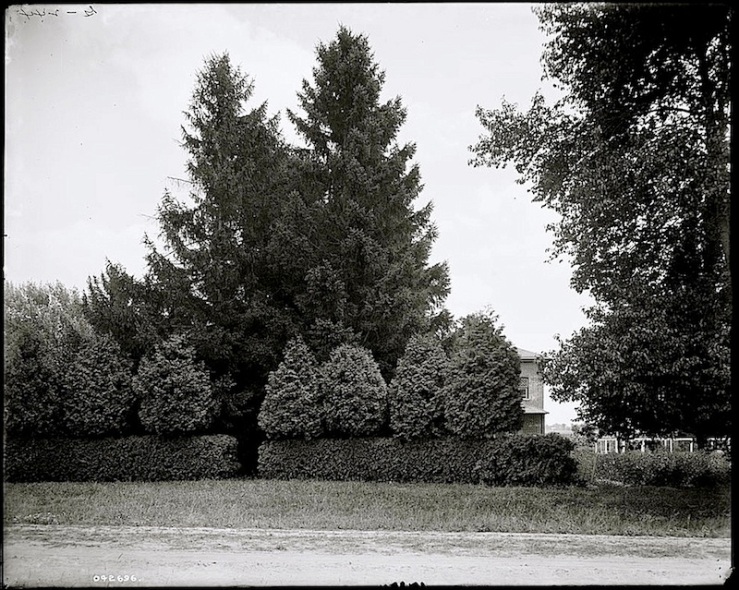 I haven’t been able to find out what happened to the property later in the 20th century, except that it seems to have been empty by the late 1990s, if not well before — perhaps because of its reputation as a haunted house.

Naturally, teenagers found it a fun place to explore at night and vandalize. In August 2005, much to the neighbors’ relief by one account, the house was demolished. However, there continue to be reports of strange lights and noises in the ruins of the basement.

You can scroll through more (and larger) images of The Firs by clicking on ‘Continue reading’ below and then on any thumbnail in the gallery.

*Photos by Detroit Publishing Co., via Library of Congress Prints and Photographs Division.