“Plants and flowers in oil cans on back porch of [coal] miner’s house. Capels, West Virginia,” September 1938, by Marion Post Wolcott, via Library of Congress Prints and Photographs Division.*

Capels is an unincorporated community located in McDowell County, the southernmost county in West Virginia.

Above, detail from previous photo:  perhaps the beginning of a winter garden on a windowsill.

Wolcott took a large series of photos of coal miners and their families in West Virginia.  I think the house on the right below may be the same as the one above.

“Wives of coal miners talking over the fence.”

“The women in this photo [above] are dressed up, perhaps for their walk to the company store and back,” according to an online photo exhibit about West Virginia coal miners. “Miners’ wives often led difficult lives and relied on each other for support.”

Above, detail from previous photo: impressive vines on this porch.  Note the house beyond and how it is built out from the hillside. 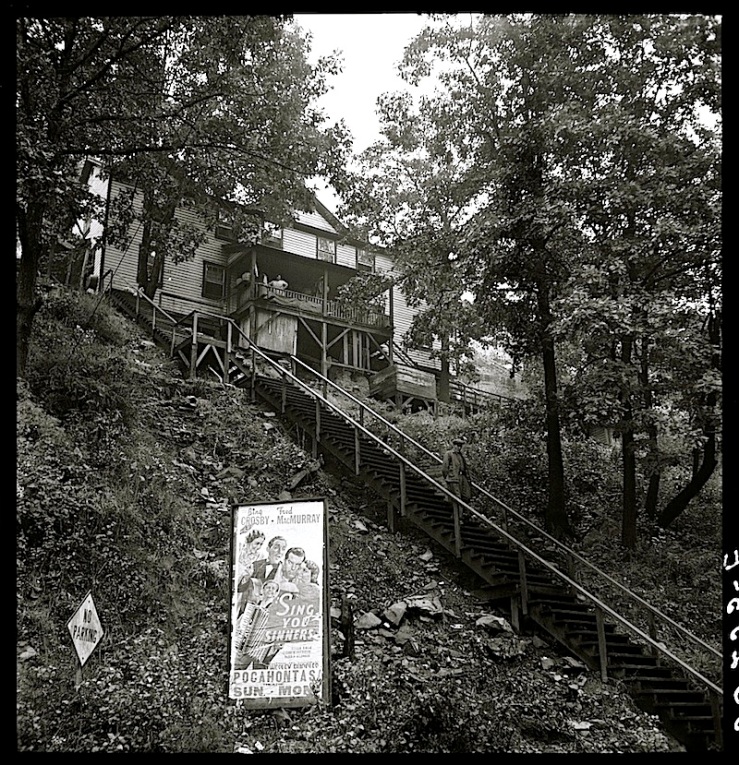 “Home of Negro families.”  I count about 70 steps.

Above, detail from previous photo: African-Americans moved to the county to work in the mines, as the coal industry grew at the turn of the 20th. century.**

McDowell County once set records for coal production in the state and country, but since the decline of the industry in the 1980s, it has lost thousands of jobs and has the highest poverty rate in the state.  The mine in Capels (by then owned by Semet-Solvay) closed in the 1980s.

Photos of Capels in 2005 are here. There are photos of McDowell County in 2012 here (and more vintage pictures here).

*All photos here were taken in Capels, September 1938, by Marion Post Wolcott, via Library of Congress Prints and Photographs Division.  The captions in quotation marks are from the Library’s online catalogue and were probably written by Wolcott.

** “McDowell, which had no slave population and no free blacks after emancipation, became the state’s center of African-American population in the industrial era,” according to The West Virginia Encyclopedia. “McDowell County blacks established a power base within the state and local Republican Party. . . . A fourth of the population was black in 1950.”