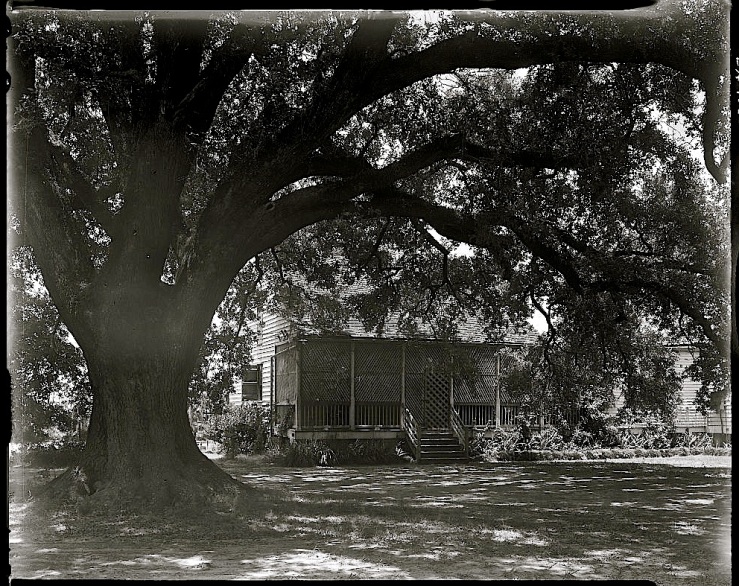 The old kitchen wing of Palo Alto Plantation House near Donaldsonville, Louisiana, in 1938, by Frances Benjamin Johnston, via Library of Congress Prints and Photographs Division.

It’s almost too dark and deep to see very well in the above picture. However, this shaded, lattice-enclosed porch must have been the best possible place to sit and snap beans during Louisiana summers.

The kitchen building was originally free-standing, about 22′ from the house. Later, it was connected to the main house by a breezeway.

A 2003  Historic American Buildings Survey (HABS) drawing of the property seems to indicate that the enormous Quercus Virginiana or live oak tree at the right in the top photo was still standing at that time. Over 15 live oaks are shown in the area immediately in front of the house.

The principal part of the house is described in the HABS as an “Anglo-Creole type Louisiana plantation cottage decorated in Greek Revival style.” It was built in the mid to late 1850s and faces Bayou La Fourche, off the Mississippi River.

Its porch, above,* is a “deeply undercut Acadian gallerie,” according to The Planter’s Prospect: Privilege and Slavery in Plantation Paintings.

In a c.1860 painting of Palo Alto shown and discussed in the book, the main porch originally had railings and double front steps. 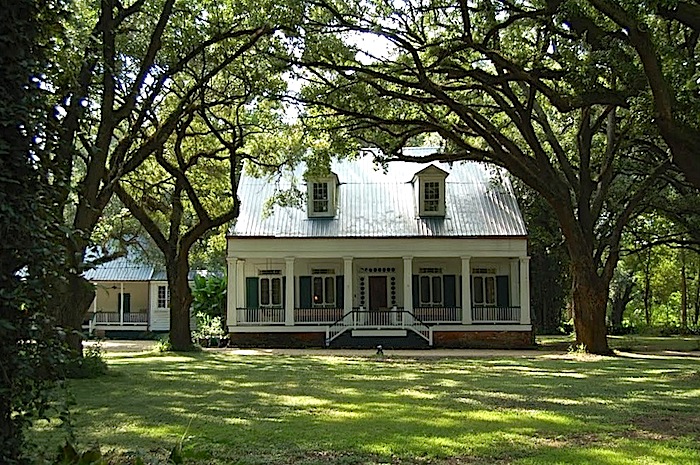 The steps and railings were restored (and the lattice removed from the old kitchen porch) by the time of the HABS and this 2010 photo† above. The plantation (with 6,000 acres, according to one source) belongs to a family that has owned it for several generations. They now offer stays in a “Log Cabin” lodge and guided hunting trips on the property.

. . . the tree implies a quiet place
where pendulums might rest,
the heart decline to beat, a place
of time disclosing the lattice of time. . . .

— John Beer, from “The Waste Land“

*Photo (cropped by me) from 1938, by Frances Benjamin Johnston, via Library of Congress.

†Photo by cajunscrambler, via Panoramio.