(Those are antique smoking pipes in the corner.)

The house was built in the early 1780s. George Washington was a guest there several times, and Abigail Adams praised the owners’ “true English hospitality” after a stay.

It still stands, although the boxwoods along the front walkway are gone.

The estate  is open to the public and available for events. (Although, it has been closed for much of 2013 for renovations.)

I am fascinated by the old boxwoods of Tudor Place, an historic estate in Georgetown.

In 1805, soon after she and her husband purchased the property, Martha Custis Peter, the granddaughter of Martha Washington, planted (or more likely, directed to be planted) an ellipse of Buxus sempervirens ‘Suffruticosa’ in the center of the drive on the north side of the house.

For the Tudor Place Foundation, who received the estate in 1983 from a direct descendant of Martha’s, they must be a much-loved treasure and (I suspect) a big preservation headache.

Today, the ellipse is over 5′ tall, as one might expect, given its age. When I toured the property almost ten years ago during a Landscape Design class, the teacher fretted that it was too large for the original design and for the scale of the house and drive.

At that time, the boxwoods were nearly as tall as now, but still nicely filled out all around.  As such, I found them impressive, but not particularly interesting.

However, in February 2010, Washington had the deepest snows in over 100 years.  The damage to the boxwood ellipse and to  many other old specimens at Tudor Place was severe, and the hedge’s interior was opened to view in many places. Now the ellipse shows interior volume as well as exterior.

My sympathies to the Foundation, but I find the old shrubs’ new negative spaces and sculptural qualities beautiful and rather moving, and I took photo after photo.

There are other old boxwoods in the north-side garden, like these in a planting bed near the old “tennis lawn.”

And these along a walkway near the bowling green.

I wonder how long they will be left in place, given their current condition.  I find them beautiful, but they don’t really conform to a classic neat Federal or Colonial Revival aesthetic.  But who wants to replace bushes planted by the step-granddaughter of the father of our country?

If they were mine, I think I would want to turn the old ellipse’s design somewhat inside out and fill many of the open spaces with the contrasting foliage of other perennials planted inside them — as is happening among some of the equally ancient boxwoods at the Bishop’s Garden at the National Cathedral.  I’d like to see a few Rudbeckia maxima flowers waving over the center (although whether the ground beneath the ellipse, full of old roots, would support more plants is a practical question).

The rest of the Tudor Place garden is lovely as well, with the center north-side area symmetrically squared off in true C.R. style with brick and gravel walkways.

The well-maintained property actually shows off an interesting continuum of original and reconstructed functions and design styles from the last two centuries.

According to an archaeological study and plan by the University of Maryland, the planting of the south-side lawn, which contains the 200-year old tulip poplar and once had a view of the Potomac River, has changed relatively little since the building of the house (and therefore is of little archaeological interest).  And, of course, the ellipse is also truly from the Federal period.

The walkways and rose/knot garden existed in their current layouts by the 1830s. But the knot garden was destroyed in the 1860s by intruders seeking boxwood for Christmas wreaths.  It was replanted by the last Peter owner in the 1930s, using old family plans, although he moved it to the opposite side of the center walkway.

The northeast-side garden with lawn and curving beds was an orchard and  a tennis lawn before its current 20th century design. On the west side, there is a 20th century bowling green and a fountain on what had once been a wooded area.

A pretty 20th century patio, “Japanese” teahouse, and arbor sit off the west wing of the house, more or less in the location of the 19th century kitchen garden.  They look Tidewater southern more than anything else.

The garden is open to the public Monday through Saturday, 10 a.m. to 4 p.m., Sunday, noon to 4 p.m.  There’s a small charge of $3. See this link for information about touring the house.

To see more photos and a garden plan, click “Continue reading” below and click on any thumbnail scroll through large pictures. END_OF_DOCUMENT_TOKEN_TO_BE_REPLACED

On Friday, I visited Tudor Place, a 200-year-old estate in Georgetown built by Martha Custis Peter, the granddaughter of Martha Washington, and her husband.

I took many photos (I take full advantage of my memory card), and I want to write a post about the whole garden, but today, I thought I would start with some pictures of the property’s remarkable tulip poplar tree.

Located on the south-side lawn, the tree was possibly there when the Peters arrived.  It is now 20′ in circumference and over 100′  tall.  In 2002, it was designated the “Millenium Landmark Tree” for the District of Columbia by the America the Beautiful Fund.

Here are also some photos of a small “grove” of very large, very old boxwoods, also on the south lawn, which I thought were almost other-world-like from the inside.

I would like to share more of my photos from the Bishop’s Garden that particularly show the wonderful patterns, shades, and textures of the varied foliage. Please click on any thumbnail in the gallery. 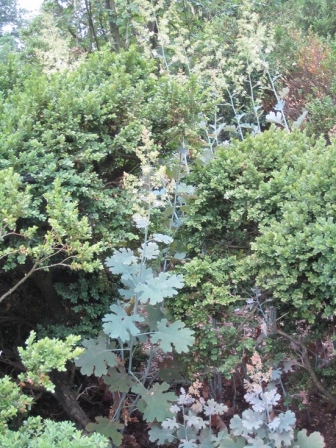 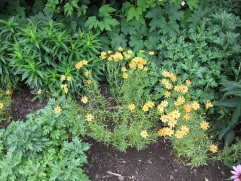 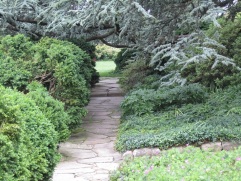 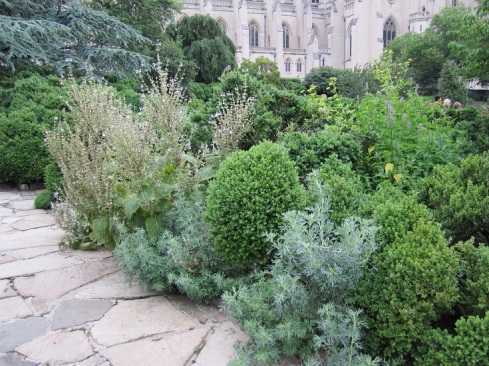 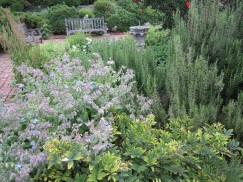 I spent yesterday morning at The Bishop’s Garden of the National Cathedral.  I’m embarrassed to admit that I had never visited this popular Washington garden before.

I’m sorry I waited so long.  The place has the beautiful patina of an old piece of silver.

The partially walled space was designed by Frederick Law Olmstead, Jr. as a private garden for the Bishop.  But in 1916, Florence Brown Bratenahl, the wife of the Dean, took over the garden’s installation and re-worked the plan for public access, opening it in 1928.  She was the cathedral’s Landscape Designer from 1927 to 1936.   Today, the garden is maintained by the All Hallows Guild, which Mrs. Bratenahl founded.

The garden sits on the south side of the cathedral immediately off an access road and parking area.   One parking space actually blocks a bit of the Norman-style arched entryway.

On stepping inside, however, you are immediately enveloped by the long branches of an old weeping cherry and encounter the first of many antique boxwoods.

In the 1920s, Mrs. Bratenahl brought in mature boxwoods from George Washington’s Hayfield Manor, from the Ellersbee Plantation in Virginia, and from other historic sites in the region.   I wasn’t able to discover from online research how many of the current bushes are from this time.

Original or not, however, they are very, very old and I like the way many have limbed up and split open at their centers, creating spaces through which other plants have grown.  (I believe I was also seeing some of the damage caused by the huge snows we had here in 2010.)

This lovely garden contains almost every shade and shape of green leaf, set against aged bark and moss-grown stone — all beautifully punctuated, but not overtaken, by the flowers of old-fashioned perennials, annuals, and herbs.

My only real reservation about the design was the central rose garden, which I think has too many brightly colored, glossy-leafed hybrid teas.   I would prefer to see bushes with more subtle appeal and interesting foliage.

The fact that the south side of the garden is open to a parking lot for St. Alban’s School is really too bad as well. In Olmstead’s original plan, I believe that area merged into woods and a stream.  However, one of the gardeners working there told me that there are plans to put in some kind of view barrier, probably a tall hedge, possibly as early as this fall.

Please enjoy the gallery below. Click on any thumbnail photo below to scroll through all the enlarged pictures. 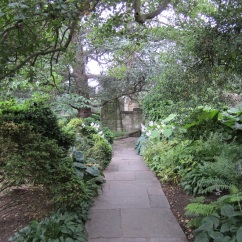 Perennials growing through an old boxwood.

Old open boxwood with perennials growing at the base.

An old boxwood and companion plants. 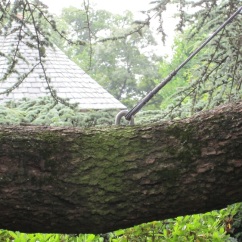 Support for the cedar. 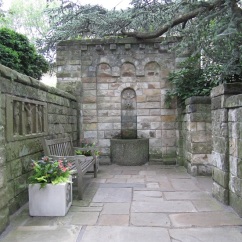 Another view of the cedar and boxwoods. 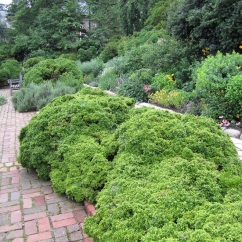 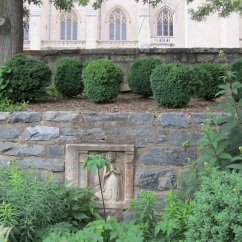 Younger boxwoods grow in a bed set on a higher tier of the upper wall with 16th c. bas relief.

Goldfish in the pool of St. Catherine.

I like the rusty orange tint of these coreopsis.

Pomegranate and parsley. Would make a good name for a blog.

What is the name of the tree? I just cannot remember.

The pattern of the stone is echoed by the variety of sages planted along the yew walk.

The cathedral and Russian sage.

The lower perennial bed. The center “tree” is an enormous yew.

Closeup of the old yew.

The Hortulus (Little Garden) with its herbs and Carolingian stone font. 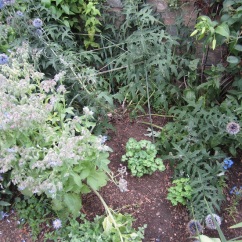 New plants. I like it that the gardeners only lightly mulch the beds.