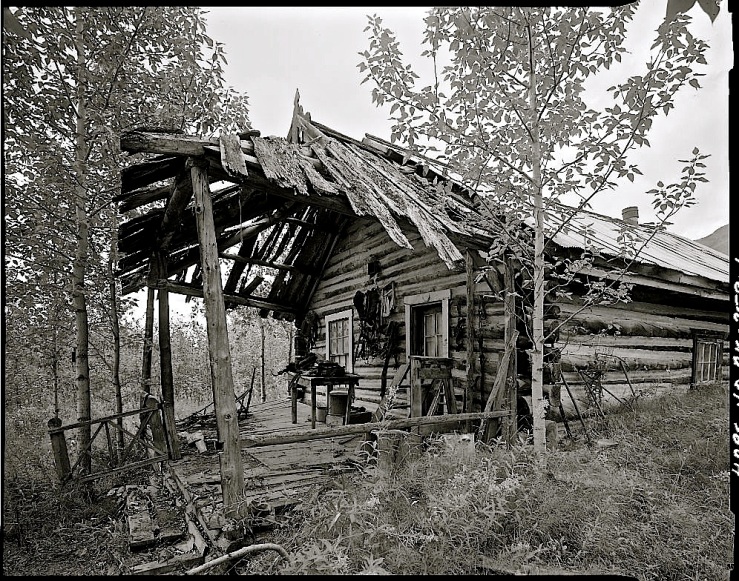 Front porch, near the Koyukuk River at Wiseman Creek, Wiseman, Alaska, July 1984, by Jet Lowe for an Historic American Buildings Survey (HABS), via Library of Congress Prints and Photographs Division (all photos here).

For over six decades, this little porch sheltered many hours of masculine conviviality. In 1913, it fronted the Siverly and Bowker Saloon.  The following year, the building was sold to a fraternal organization, Pioneers of Alaska, and then used as one of its local chapters — an “Igloo;” it was Igloo No. 8.

By 1972, the building had been sold again.  At the time of these photos, it was the home of the owner’s son.

Above: the back porch and entrance to the kitchen.

Above: the side view.

The house still stands, apparently in good condition, with only small changes to the woodwork since the time of the HABS. 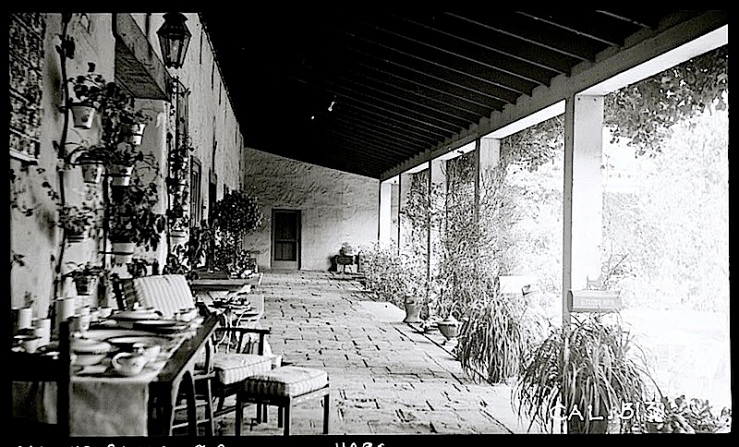 The adobe house was built between 1819 and 1826 by José de la Guerra y Noriega.  His descendants lived in parts of the house until 1945 (other parts were renovated as offices or shops after 1919).

“It is unquestionably the major monument of the Spanish and Mexican period in Santa Barbara. Architecturally it is also of great significance for the part it played in the creation of the 20th century Spanish Colonial revival in southern California,” according to the 1937 HABS report.

The house still stands and is open to the public as a museum.

A Google street view for this address shows an empty lot, but the house next door is still standing.

The house is more often called the Nelson House for the family that built it in the 1740s and owned it throughout the 19th century.  George and Adele Blow purchased it and began to restore it in 1914.  In 1968, it became a National Park Service site.

The front of the house and Main Street as it appeared about 1902. Photo by William Henry Jackson for Detroit Photographic Co.

The front of Nelson House in 1915. This photo is part of an Historic American Buildings Survey (HABS).

(There’s a photo of the front of the house and the younger boxwoods in 1862 here.)

The center hall, looking out the front door, 1915, HABS (photo cropped by me). 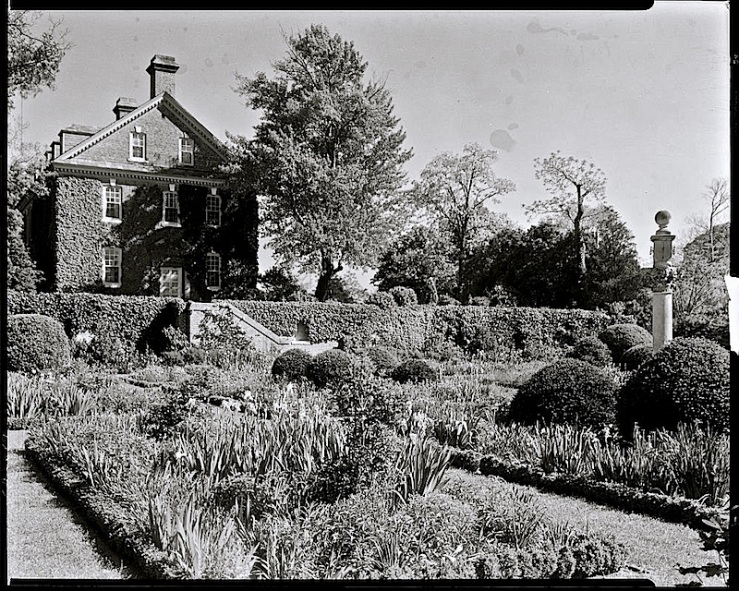 The side garden in the 1930s by Frances Benjamin Johnston.

The garden during the Blow’s ownership was designed by Charles Freeman Gillette, a landscape architect known for working in the Colonial Revival style. Today, little remains.  The giant boxwoods at the front of the house are gone.

Another view of the side garden in the 1930s by  Frances Benjamin Johnston.

*All photos here via Library of Congress Prints and Photographs Division.