I believe these are Schizanthus pinnatus, an annual herbaceous plant native to Chile and a member of the Solanaceae or nightshade family. It is also called butterfly flower or poor man’s orchid.

The porches look as if they are facing out to a beach. 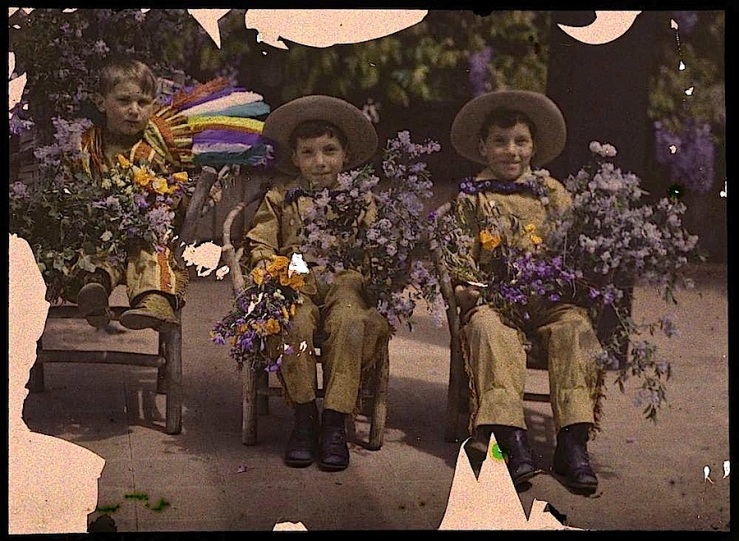 I think these are twins and their younger brother (on the left). What do you think the flowers are? Could the yellow-orange ones be California poppies?

Tompkins Square Park . . .  was reconstructed [in the mid 1960s,] just in time for an era of sweeping changes. The surrounding neighborhood became the east coast version of ‘Haight-Ashbury.’ Rock musicians, poets, hippies, and political activists transformed downtown Manhattan into a center for counter-cultural activities and political protest. It was during the mid- to late-1960s that the area surrounding Tompkins Square Park came to be called ‘The East Village.’ . . .

Tompkins Square had once before been the site of powerful expressions of joy and rebellion. A century earlier, German-Americans had transformed the square with their volkefestes and mass demonstrations. Their spirit and command of the space were being revived— only now in 1960s terms. Young people demonstrated at the bandshell against American involvement in Vietnam and in favor of women’s and third world liberation movements. They gathered to hear bandshell concerts put on by the Fugs, the Grateful Dead and Charles Mingus. They were certainly ignoring signs that cautioned ‘keep off the grass.’ . . .

— Laurel Van Horn, from “A History of Tompkins Square Park“