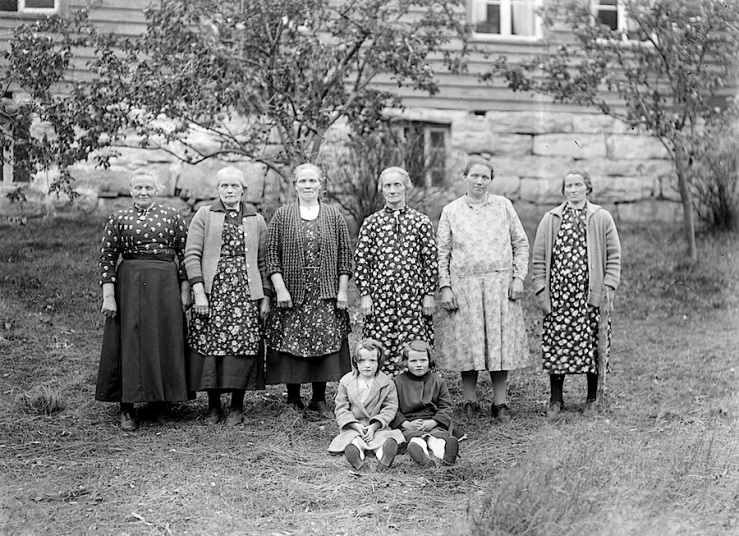 Of course it’s about their flowered dresses, aprons, and blouse. For a much closer look, click here and then on the flickr page image.

The sisters are Anne, Johanna, Synneve, Inga, Ragna, and Kristina. In 1936, Kristina emigrated to the U.S. (The two girls in front are unidentified.)

The photographer, Olai Fauske, worked all around the Sunnfijord district, which included Jølster. He sold his photos and postcards not only locally, but to people who had emigrated from the area to the U.S. and then wrote back to him requesting pictures of home.

His childhood friend Alfred, for instance, longed to see Erviki in all its summer glory: “When June comes I believe it wouldn’t be such a bad idea to try and get a picture of Erviki, when all the hills are green and the waterfall quite big. I liked that the best. . .,” he wrote in a letter to Fauske in 1909.

“Washington, D.C. Government employee taking a nap on a bench in the [U.S. Botanic] Garden,” September 1942, by John Ferrell, via Library of Congress Prints and Photographs Division.

The three women were folk musicians. Alone or in duets, they sang songs like “Swedes Blessing,” “There was a Wealthy Merchant,” “Way Out West in Texas,” “Barbara Allen,” and “The Gypsy’s Warning.”  Unfortunately, I can’t find an online recording of them. They look delightful in these pictures, however, particularly in those flowered dresses.

These are four snapshots from four hundred made during the sound recording expeditions of the Lomax family.  From 1934 to around 1950, John Avery Lomax, Ruby Terrill Lomax, and Alan Lomax traveled the southern United States and the Bahamas collecting folk music and folklore for the Library of Congress.

There’s a previous “Sunday porch” from the Lomax Collection here.

Our world, so worn and weary,
Needs music, pure and strong,
To hush the jangle and discords
Of sorrow, pain, and wrong.

— Frances Ellen Watkins Harper, from “Songs for the People“

*These photos were labeled with the location as Prairie Lea or Prairie Lea R.F.D., but also as Stanton, Texas.  Prairie Lea and Stanton are in different parts of Texas, and I have been unable to find out which town is correct.  The labels on the sound recordings the women made say “Prairie Lea” — which certainly sounds like a place in a folk song.