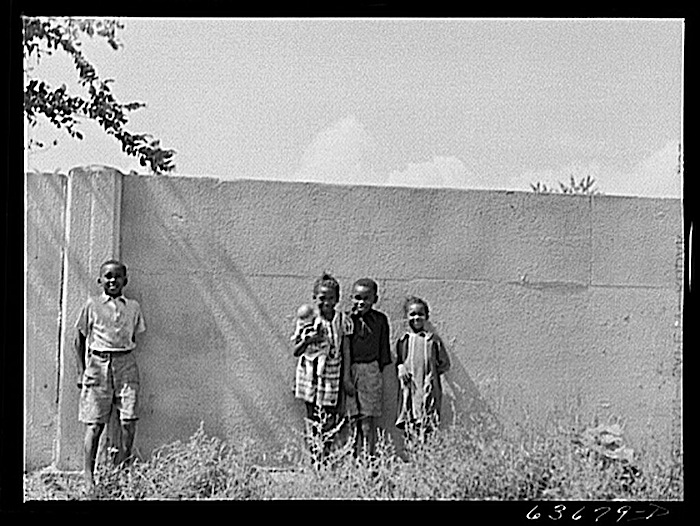 Black children standing in front of a half-mile concrete wall  in northwest Detroit. It was built in 1941 to separate their neighborhood from a white housing development going up on the other side.

The photo was taken in August 1941 by John Vachon for U.S. Farm Security Administration and is via Library of Congress Prints and Photographs Division.

The 1930s and 1940s were times of great growth for the city of Detroit and the inner-suburbs. The Federal Housing Administration (FHA), founded in 1934, pushed the idea of home ownership as an accessible goal for the average working class. . . .

[However], the FHA’s policies of mandated racial homogeneity in housing developments and redlining made it difficult for African Americans to become home owners. . . . Between 1930 and 1950, three out of five homes purchased in the United States were financed by FHA, yet less than two percent of the FHA loans were made to non-white home buyers. . . .

Public or private housing being hard to come by in the city, some African Americans were able to purchase land lots around the Wyoming Avenue and 8 Mile intersection with hopes of eventually building houses. . . . When the FHA was approached by a developer wanting to build an all-white subdivision west of the site, funding was refused because the area was too risky for investment. In a compromise with the FHA, the developer erected the wall that was to divide the “slum” from his new construction project.