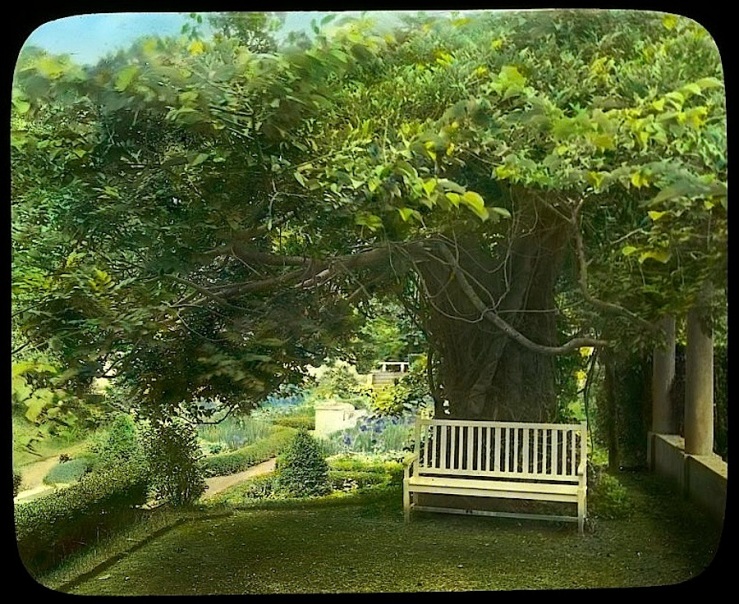 Garden of “As You Like It,” the James Harper Poor House, East Hampton, New York, ca. 1915, by Frances Benjamin Johnston, via Library of Congress Prints and Photographs Division Commons on flickr.

Poor was a New York City businessman (dry goods) and Shakespeare devotee, who, in 1899, bought a shingled American Colonial country house, part of which was built in the 17th century. He then changed its style to English or Tudor Revival — all half-timber and stucco, as was so fashionable at that time.  Today, the property is The Baker House 1650 bed and breakfast. 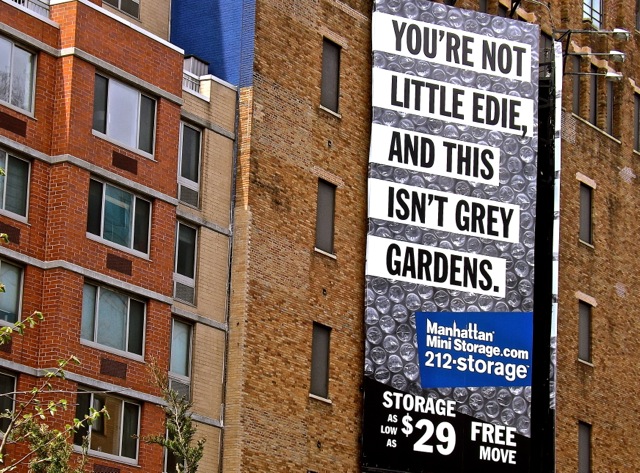 While walking along the High Line in New York City last month, I spotted this billboard for a storage company.   It made me remember these Library of Congress hand-colored lantern slides by Frances Benjamin Johnston and Mattie Edwards Hewitt.

This was Grey Gardens in 1914 — long before it was made famous by the 1975 documentary.

Anna and her husband, Robert Carmer Hill, had purchased the property in 1913.  They sold it to Phelan and Edith Bouvier Beale (whose daughter was Little Edie) in 1927.

Hill imported the concrete walls from Spain.  She took the name for the house and garden from its environment.

It was truly a gray [sic] garden. The soft gray of the dunes, cement walls and sea mists gave us our color scheme as well as our name… nepeta, stachys, and pinks… clipped bunches of santolina, lavender and rosemary made gray mounds here and there. Only flowers in pale colors were allowed inside the walls, yet the effect was far from insipid….I close my eyes and sense again the scent of those wild roses, the caress of the hot sun on our backs as we sauntered to and fro from our bath and lazy mornings on the beach.

Beyond the property is the Atlantic Ocean.  The walled garden was 70′ x 40′.

The estate (now two acres) has been owned by Ben Bradlee (formerly editor-in-chief of The Washington Post) and Sally Quinn since 1979.  They have restored both the house and garden.

Now the land between the walled garden and the ocean is filled with newer houses and gardens, and there is a very tall hedge just behind the far wall and the pergola.

The open doorway in the photo above lined up with the pergola.  It seems that, at the time of this photo, there was an opening in the garden wall between the house and pergola.  But I can’t tell if the opening was there before or after the time of the other photographs.

The Japanese iris garden at “Grey-Croft” in East Hampton, NY, in 1913, on hand-colored glass lantern slides.

The images are part of the Frances Benjamin Johnston Collection of the Library of Congress Prints and Photographs Division.

They were taken by Frances Benjamin Johnston and Mattie Edwards Hewitt, when the two photographers worked together. The slides were used by Johnston as part of her garden and historic house lecture series. 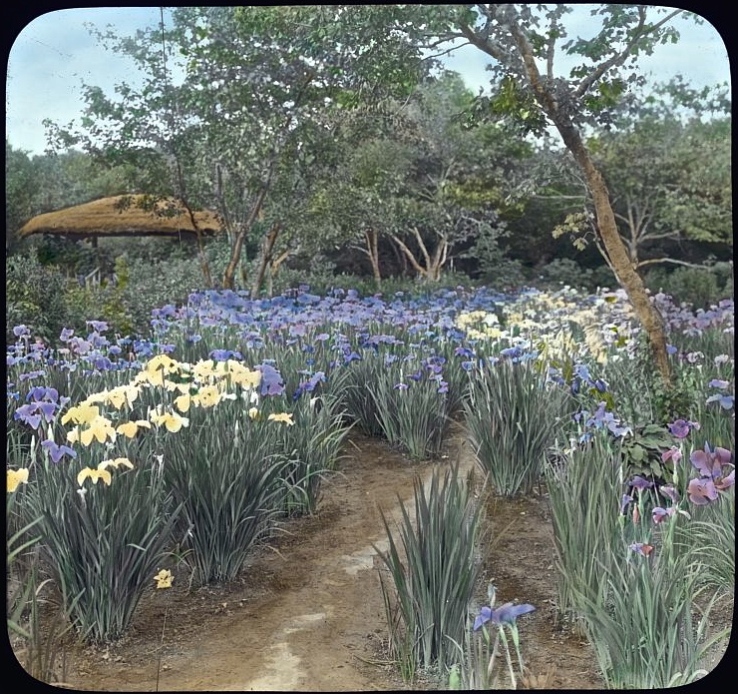 The garden — owned at the time of these pictures by Stephen and Emma Cummins — is now part of the Nature Trail and Bird Sanctuary, according to the Library of Congress online catalogue.

Having [divided, planted, fed, and weeded your irises] more or less faithfully, you will be rewarded by spectacular blooms in May. The iris is one of those plants that may as well be spectacularly well grown as not. Properly done — and it is at least as easy as growing tomatoes or corn or roses or things of that sort — the bloom will be so thick you cannot believe it at all, and the colors will be so sparkling and fresh you will jump (as it were) up and down.

They will be, as a rule, in total perfection by May 22, or whenever the year’s major hail and thunderstorm is scheduled.

— Henry Mitchell, from The Essential Earthman