Last February, we took our visiting oldest daughter to Nyungwe National Park and hiked the first half of the trail that includes a tree canopy walkway.  Last week, with second daughter and friend in tow, we completed the entire circuit.

The hike started with us tucking our pants legs into our socks (against ants) and receiving walking sticks.

Although the paths are well-maintained, the sticks are necessary for the steeper, sometimes slippery sections.

The steps shown above are the first of many, many, many on a long descent to the canopy walkway. (The welcome center is at one of the highest points in the park.)

It was a hazy day, so I can’t show you the great mountain views that are otherwise visible along the way, but you can click here to see my photos from last February.

Above: Our guide led the way.  He spotted a number of blue monkeys and turaco birds for us.**

(The earth walls that were cut when the trail was created — to the right of the guide above — bring the smaller plants of the forest floor to almost eye level. I’ve put pictures and names of some of them in a photo gallery, which you can scroll through by clicking on ‘Continue reading’ at the end of this post.)

Above: We arrive at the beginning of the canopy walkway.

During last year’s visit, with only the three of us and the guide, the walkway swung less, and I stopped a few times to look down and take pictures. (You can see them here.)

This time, in a group of about fifteen — with eight people crossing the walkway at a time — the shaking made me keep my eyes on the back of the person in front of me.

Above: Our guide starts across.

Above: I did look down after I reached the top of the second tower.

Above: Back on the ground below the second tower. 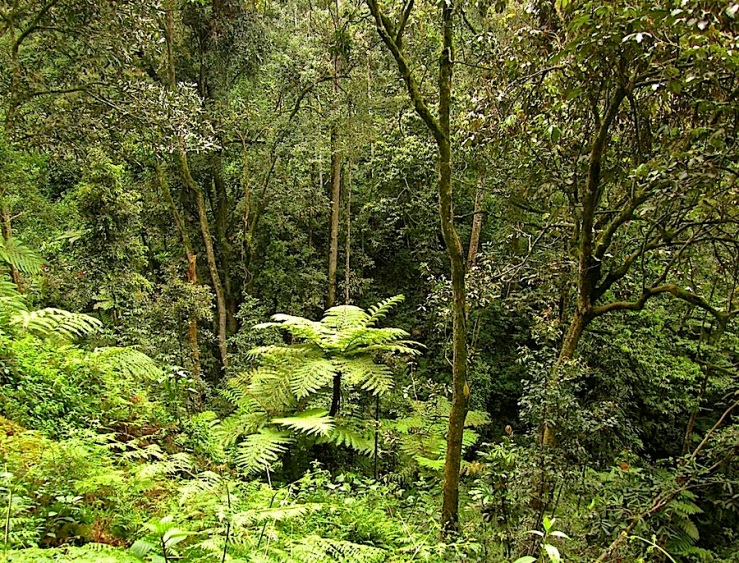 When you cross the middle section of the walkway and (dare to) look down, you see a narrow valley of tree ferns and hear the moving water of a stream.  The second half of the hike continues on to that valley.  There, we saw hundreds of the tall ferns.

In fact, this trail is named — in Kinyarwanda — for the tree ferns: the Igishigishigi Trail.

Cyathea manniana is one of two tree ferns in the park.  The other is C. dregei.  Manniana only grows in undisturbed forest, while dregei can be found along the sides of the road through the park (it also has persistent old leaves). 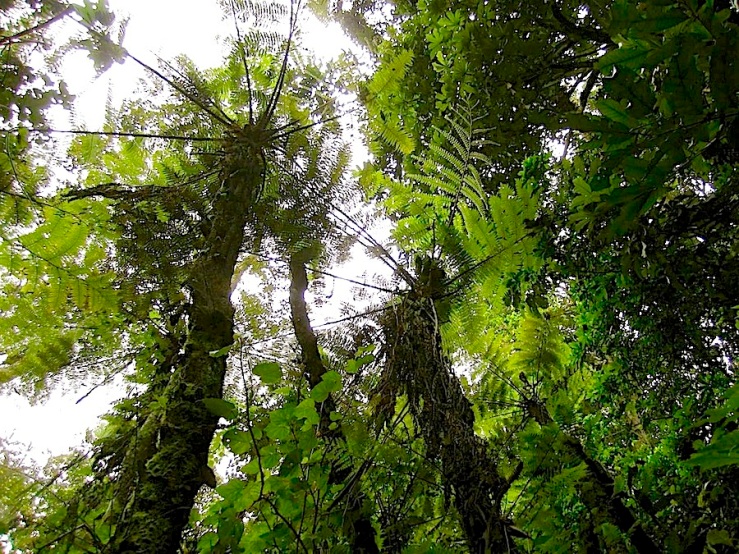 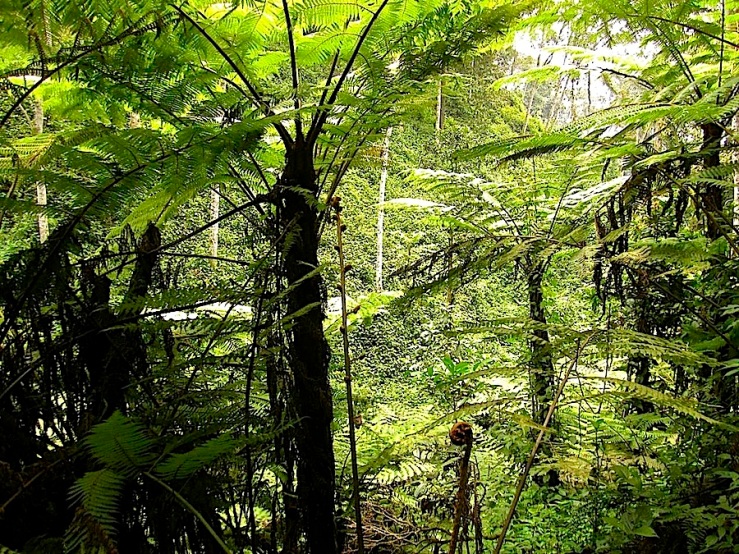 “C. manniana is traditionally used as a medical plant to treat snake bites,” according to my field guide.*** There are nine kinds of snakes in the park, but only one is poisonous. 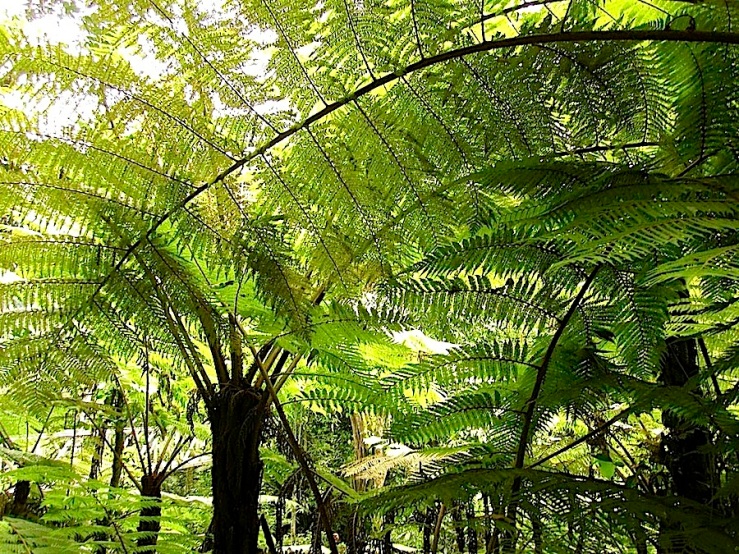 Above: A small bridge crosses the stream that we heard from the canopy walkway.  The guide meant to take us down to the water, but there were too many biting ants on the path.

Tree ferns are one of my favorite plants, but unfortunately, they would not grow well in the cold or the heat of our Washington, D.C., garden. 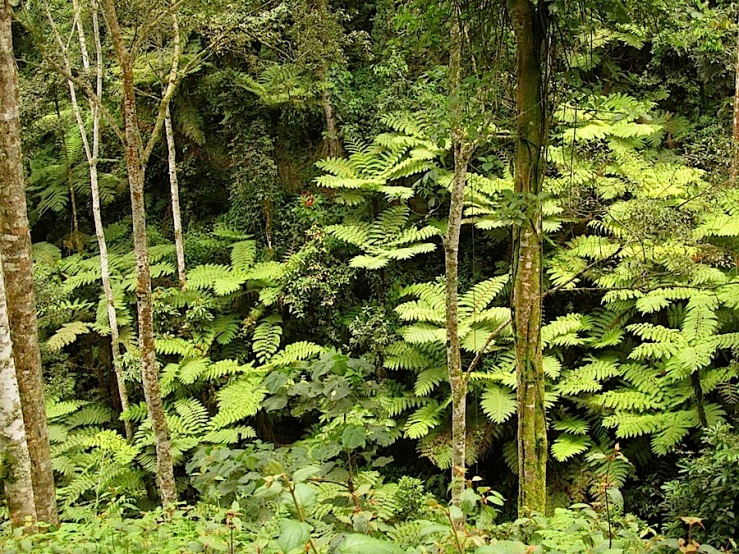 Above: Leaving the ferns behind, we started back to the welcome center. 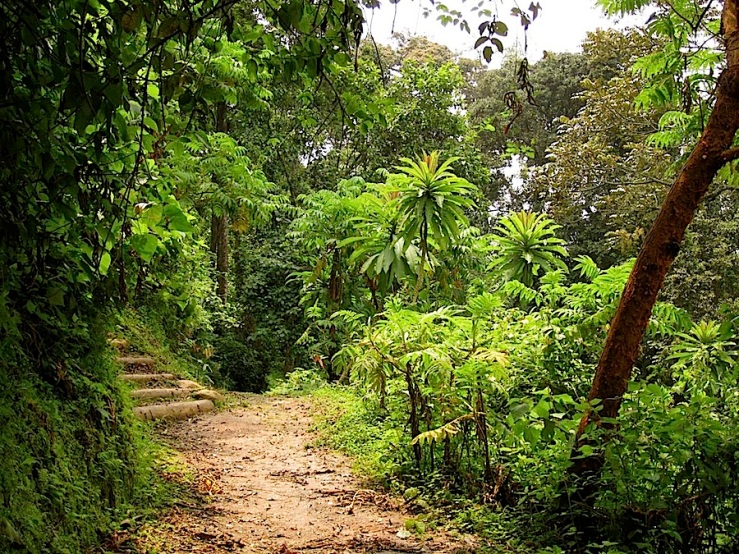 Above (on the right): Nearing the final set of steps, we found a large group of Lobelia gibberoa or giant lobelias.

With their long candles of greenish white flowers, the plants can grow to 29′ (9 m.) in height.  Latex from the stems is traditionally used to treat irritation from stinging nettles. 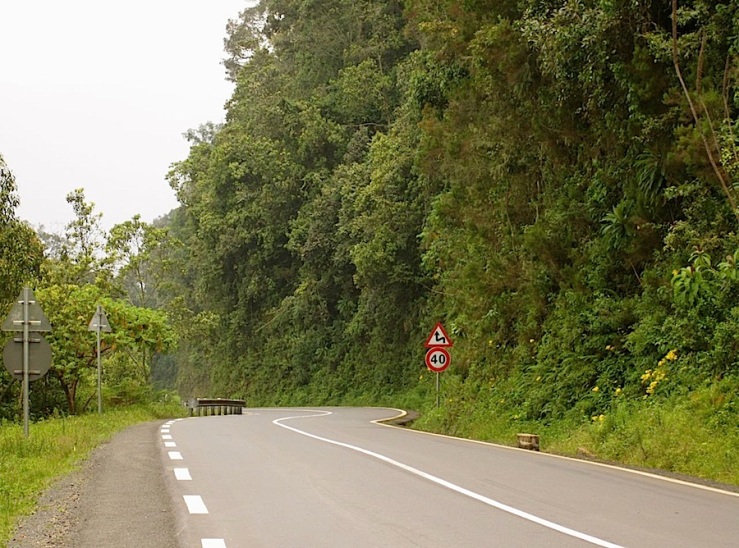 Above: After the hike, we went back to the Nyungwe Forest Lodge on the Huye-Rusizi Road.  The yellow flowers along the edge are a Senecio species.

*from “Ex Libris” by Eleanor Wilner.

** It’s also quite possible to see turacos flying from tree to tree from the pool at the Nyungwe Forest Lodge.

***An excellent book about the park is the Illustrated Field Guide to the Plants of Nyungwe National Park [of] Rwanda by Eberhard Fischer and Dorothee Killman.  It’s 770 pages long, with color photographs of 650 plants.  You can buy a copy here.  Unfortunately, it’s $71.  Some copies were printed for the Rwandan tourism office, and  I bought mine in a Kigali bookstore for about $25, but I haven’t seen any on sale here for about a year. 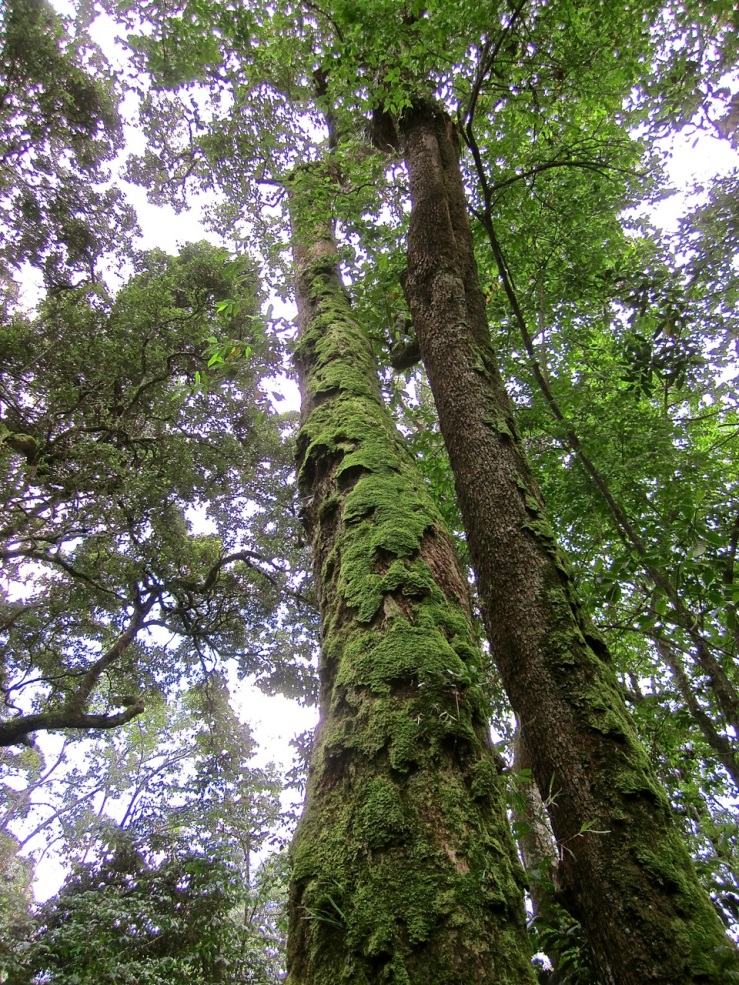 Last February, I wrote about our stay at the Nyungwe Forest Lodge.  Recently, however, I realized that I have never given you a look inside the forest.

The Nyungwe National Park, in the southwest of Rwanda, is 393 square miles of mountain forests, swamps, and moorland.

It has over 80 miles of constructed trails, but during our two-night stay at the lodge, we mainly wanted to relax — so we decided to walk the 1.3 mile Igishigishigi Trail, which includes a canopy walkway suspended 197′ above the ground.

The trail begins at the Uwinka Visitor Center, which was renovated three years ago with U.S. assistance.

The center’s  interpretative display features panels on the mountain rainforest and Nyungwe’s biodiversity, its people, and its role in the Congo-Nile watershed.  The text is in Kinyarwanda, English, and French.

Below are the steps leading to the Igishigishigi Trail.  The shadow with the camera was me, the one on the left was our visiting daughter, who was wondering what she had gotten herself into. 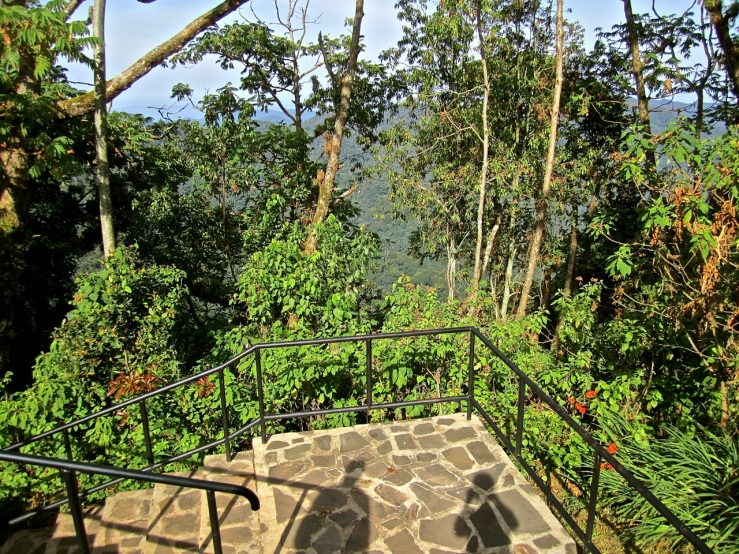 The view near the beginning of the trail is wonderful. Uwinka is at one of the highest points in the park.

In the left lower corner above, you can just see one of the towers that support the canopy walk.

Below is the trail, 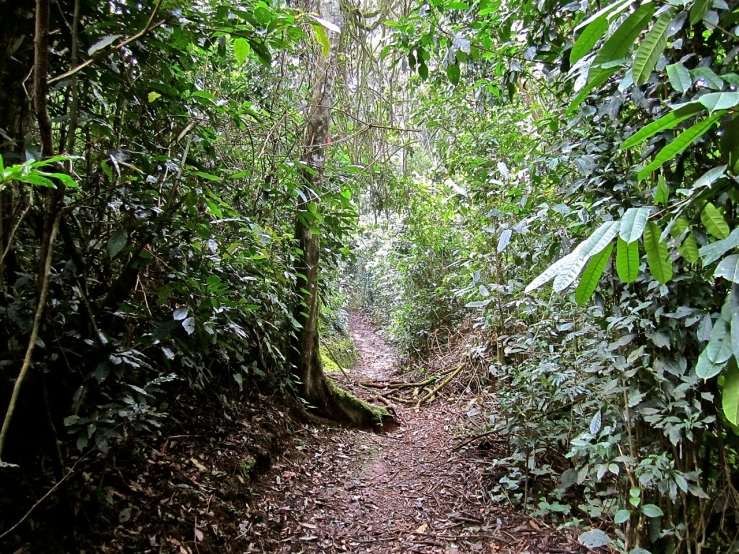 It sometimes passes along more open woodland, below.

We came across benches from time to time, although this double arrangement, below, didn’t look very comfortable. 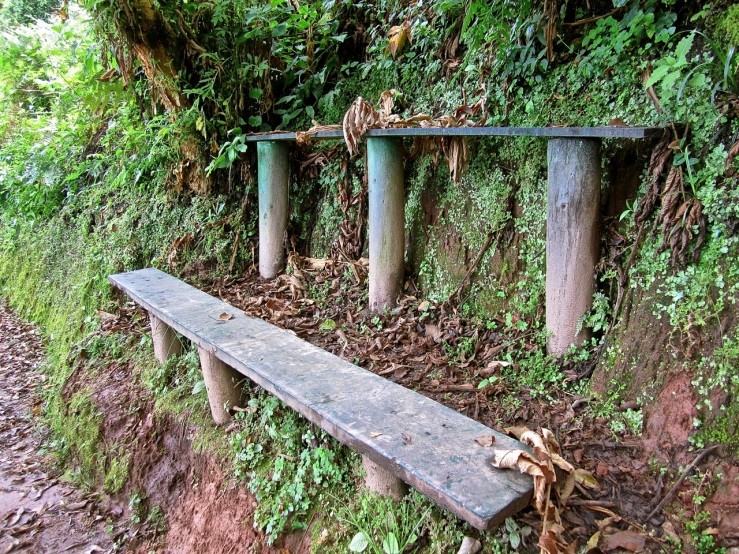 Several species of trees are labeled like this one. 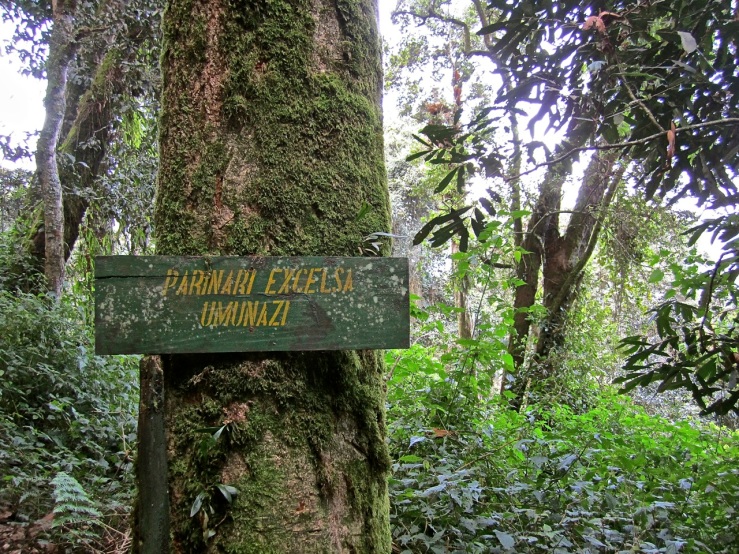 The Parinari excelsa (or Umunazi in Kinyarwanda) grows to heights of 82′ to 131′ with a thick, cauliflower-shaped crown, 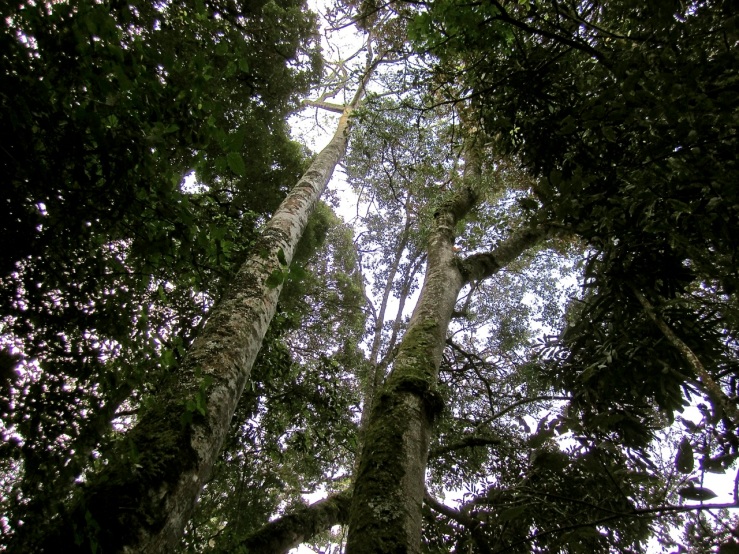 An assortment of ferns, mosses, lichens, and orchids live on the magnificent trees

and on the forest floor.

One of the more common, and easily recognizable, plants along the trail is the giant lobelia, below.

There are two species of giant lobelias in the park.  I think these are Lobelia gibberoa (or Intomvu in Kinyarwanda).

After the explorer Johannes Mildbraed first saw this plant in Nyungwe in 1907, he wrote:

[It] would have awakened the interest of the veriest dullard at botany. . . .  When I first espied these strange shapes. . . my heart beat fast at the realization of a long-hoped-for sight, a feeling that is comparable only to that of a hunter at the first sight of some rare game.

The one above was only a few feet tall, but more mature specimens towered over our heads.

After about 45 minutes, we arrived at the canopy walk. 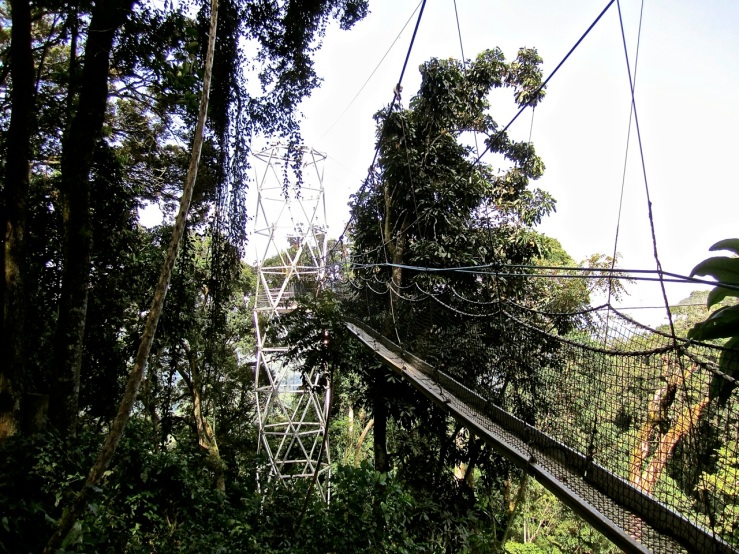 In the photo below, our guide was explaining to us how the suspended bridges can support two cars, or twenty cars, or five elephants, or something like that.

Below:  looking down from the platform of the first tower. . .

Below, we started out onto the middle and highest section. . .

and began to look down.

It is unsurprisingly difficult to take pictures while standing on a 12″ wide swaying walkway.

Below, you can see the tops of tree ferns, for which the trail is named (in Kinyarwanda), and we could hear water from a hidden stream. 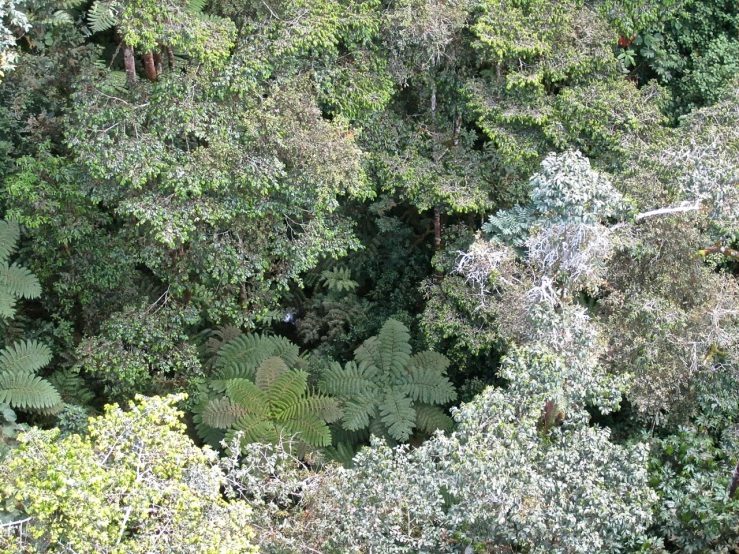 A park guidebook says, “The walkway is strong and secure but will provide the visitor with a definite burst of adrenaline.”

In the photo above, taken from the walkway, you can see what I think are the young reddish-rose leaflets of Carapa grandiflora.  There is a wonderful full-color field guide on the plants of the park (here*), but, of course, mine was sitting back home on my desk during our trip.  However, I’m sure this was the best thing for my relationships with my husband and daughter, not to mention the guide.

Although the forest is home to many species of birds and monkeys, we did not see any along this trail — possibly because the popular walk is a bit noisy with humans talking.  But we saw both blue and L’Hoest’s monkeys along the road on the drive back to the lodge and from the balconies of our rooms.  And there is another park trail that features groups of chimpanzees.

And the next day, when we were almost out of the park, we spotted this guy, below, and a friend walking along the side of the road (photo by M. Koran).

To scroll through larger version of the images, click on ‘Continue reading’ below and on any thumbnail in the gallery.

*Sometimes you can find it here in Rwanda at bookstores or museum shops.  However, they were not selling it at the park or lodge when we were there.
END_OF_DOCUMENT_TOKEN_TO_BE_REPLACED