Fairfield was a planned community built in 1910 for the workers of U.S. Steel’s plants in the Birmingham area. Its (mostly white) residents could either rent or purchase modern houses with indoor plumbing and central heating. There were also parks and playgrounds, churches, a public library, and 30,000 newly planted trees and shrubs.

The photograph is one of over sixteen thousand created or collected by Frank G. Carpenter and his daughter, Frances, to illustrate his geography textbooks and popular travel books.

Lady Henry Somerset and T.P. O’Connor in a garden distributing cabbages to children, between ca. 1910 and ca. 1915, Bain News Service, via Library of Congress, Prints and Photographs Division.

Lady Henry  (born Lady Isabel Cocks) was an heiress who married the second son of the Duke of Beaufort.  After the couple separated, she turned to charity work on her various properties. She later became president of the British Women’s Temperance Association and a campaigner for birth control and women’s suffrage. In 1913, the readers of the London Evening News voted her their choice for first female prime minister of the United Kingdom.

Thomas Power O’Connor was an Irish journalist who founded and edited several newspapers in London. He was also a member of Parliament for the Irish Nationalist Party and later as an independent (representing Galway and then Liverpool).

I cannot tell what plants are growing in the flower (?) beds, but they are sectioned off — perhaps by bloom color?

I love this formal pose in front of a vegetable garden — and it’s very typical of the photographer’s work.

Corkhill was an amateur who took thousands of pictures of his prosperous dairy farming community between 1890 and 1910.

His images were rediscovered in 1975, when his daughter gave his surviving glass plate negatives to the National Library. Among the 840 that could still be printed were portraits of family and neighbors of a “special intensity and intimacy,” according to the book, Taken at Tilba.

For the natural light, Corkhill had to work outside, in gardens and farmyards. But he often posed his subjects as if they were in a studio, with small tables, chairs, and books. His backdrops were sometimes shrubs and flowers, but he also seemed satisfied with rough fences, water tanks, or the space between two farm sheds. Occasionally, the sitters look a little amused by the process, but the photographer’s approach is not ironic.

“Corkhill’s familiarity with and affection for his subjects is evident . . . and imbues his photographs with a strange combination of authority and informality. He has a rather casual approach to the backgrounds in his portraits, as if his familiarity with the scenes he records makes him impervious to some of their oddities,” according to his biography on the Library’s website.

You can click on the linked titles below to see more of his pictures, or you can browse through the online catalog here.

Crystal Springs, Mississippi, between 1900 and 1950, via Luther Hamilton Photograph Collection, Mississippi Department of Archives and History Commons on flickr.

The almost 1,000 photos in this collection were taken or collected by the Luther Myles Hamiltons — Sr. and Jr. — during the first half of the 20th century.  They document life in and around the farm town of Crystal Springs.

Luther Sr. was a portraitist, and his pictures of the babies, children, and women on this page are lovely.

Many of the farm fields in the suburbs of Stuttgart are blue with rows of cabbages right now.  I will try to get a photo before the harvest.

The stump of the newborn
dries in the crook of my arm.
I am the witch, cradling
the pale green head,
murmuring, “Little one,
you look good enough to eat.”

— Lisel Mueller, from “Found in the Cabbage Patch“

A few beautiful Kodachrome images of the season. . .

“Exhibit of crops and vegetables at the Pie Town, New Mexico, Fair,” 1940, by Russell Lee.

The story of Pie Town and of the photos Lee took there is here, in Smithsonian Magazine. 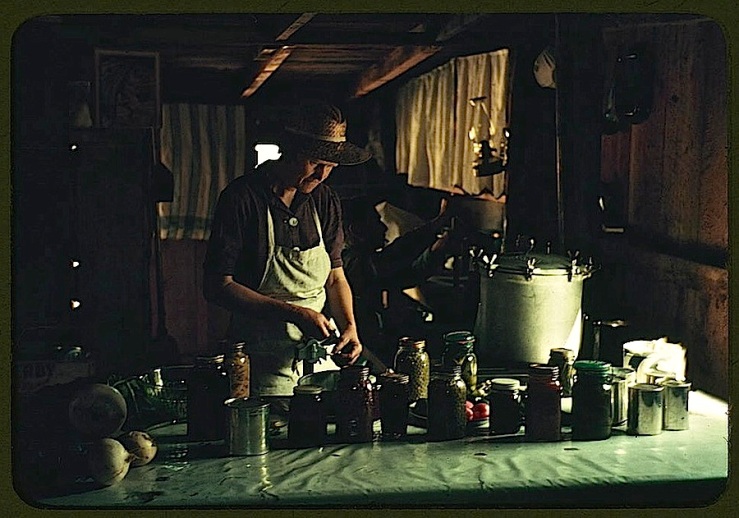 Mrs. Jim Norris canning vegetables, Pie Town, New Mexico, 1940, by Russell Lee. (You can click on the image to enlarge it.) 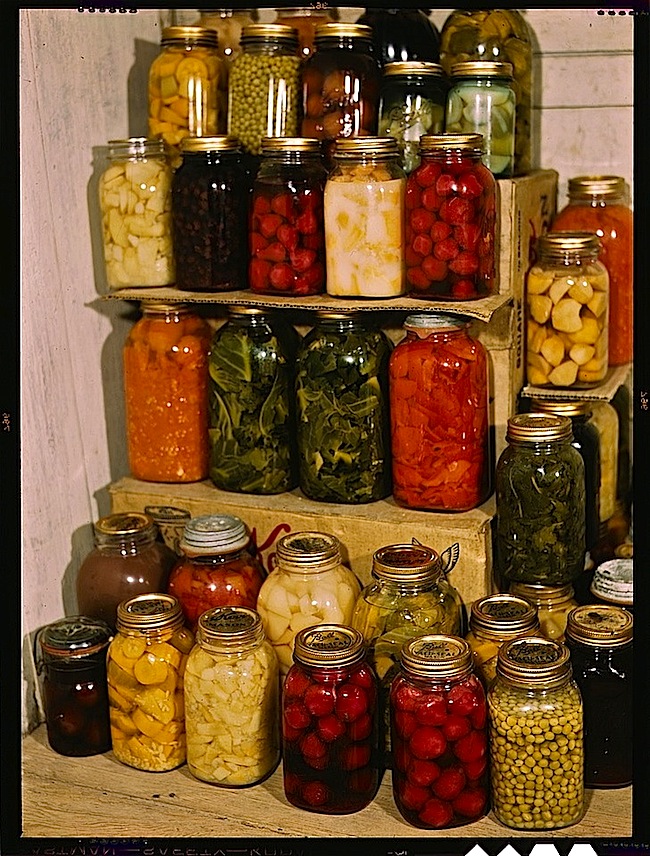 All three images were taken for the U.S. Farm Security Administration/Office of War Information on the then new Kodachrome color transparency film.  All via Library of Congress Prints and Photographs Division.

Oh! for a thousand pumpkin seeds,
To plant for my son John;
He says that pumpkin pies are good
When the winter time comes on.