The north porch of the Vhay House, 835 Leguna Street, Santa Barbara, California, April 1934, by C. A. Fletcher for an Historic American Buildings Survey (HABS), via Library of Congress Prints and Photographs Division.* 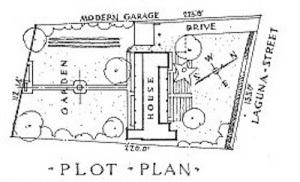 The Rafael Gonzalez House, which was owned by Louise and David Vhay at the time of these photos, was built in 1825.  It is a typical adobe townhouse of the Mexican California period, with walls over 2′ (.61 m.) thick.

Gonzalez was a soldier and landowner when he built the house for his Italian bride. He became mayor or alcalde of Santa Barbara in 1829.  His daughter, Salome, inherited the home in 1866 and lived there until 1923.

The Vhays restored and enlarged the house.  It is now occupied by Randall House Rare Books.

Above: bougainvillea above and calla lilies below, along the north porch, by C. A. Fletcher.

Above: north porch, by C. A. Fletcher (cropped by me).

Above: south porch from the southwest. Photographed April 1934, by H. F. Withey. 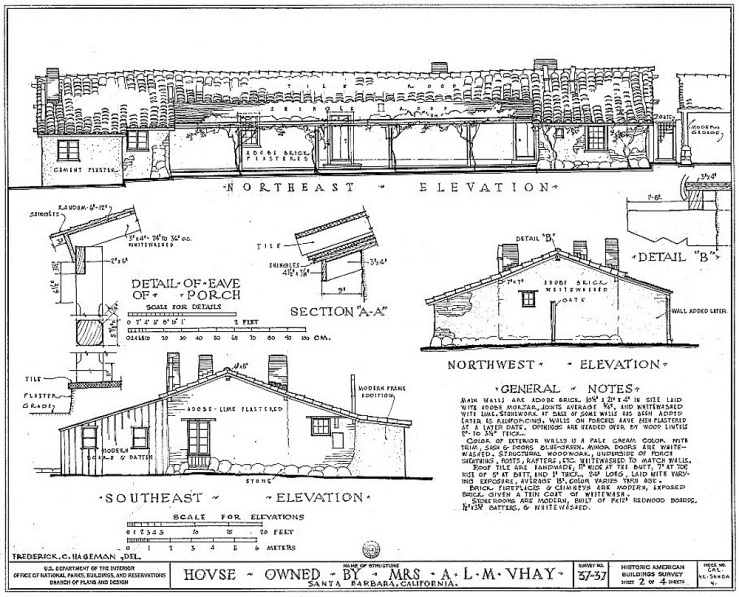 Above: 1934 drawing by Frederick C. Hageman (also the small plan above).

Above:  2010 photo of the Rafael Gonzalez House, now a rare book store, by Dilly Lynn, via Wikimedia Commons.  There’s also a nice painting of the house in 1953 here.

The house was designated a National Historic Landmark in 1970.

*All photos and drawings here, except the last image, via Vhay House HABS, Library of Congress.

We have quite a number of blooming plants right now, but it’s been so wet lately that most are looking a bit rain-addled.

I love these Kniphofia uvaria or red-hot-poker plants even though these spikes are about done. They are the most beautiful orange. 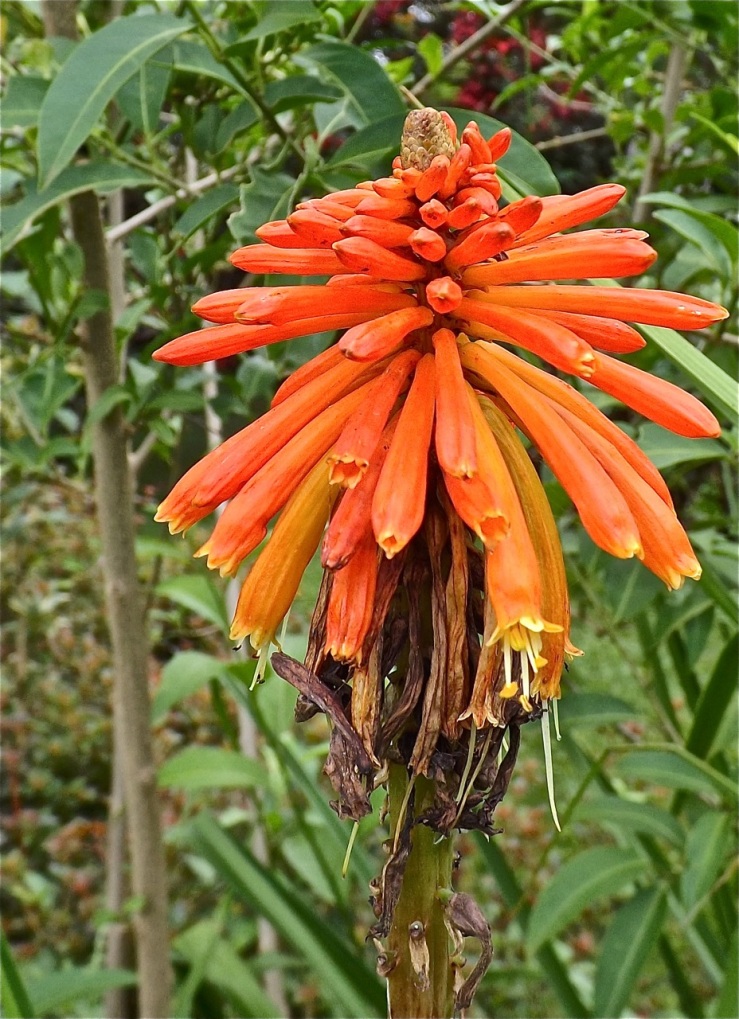 They have bloomed steadily since we arrived in September.

My favorite blooms today are from a pink bougainvillea growing up into this conifer (I don’t have a name for it). They are now eye-level with our upstairs bedroom windows. 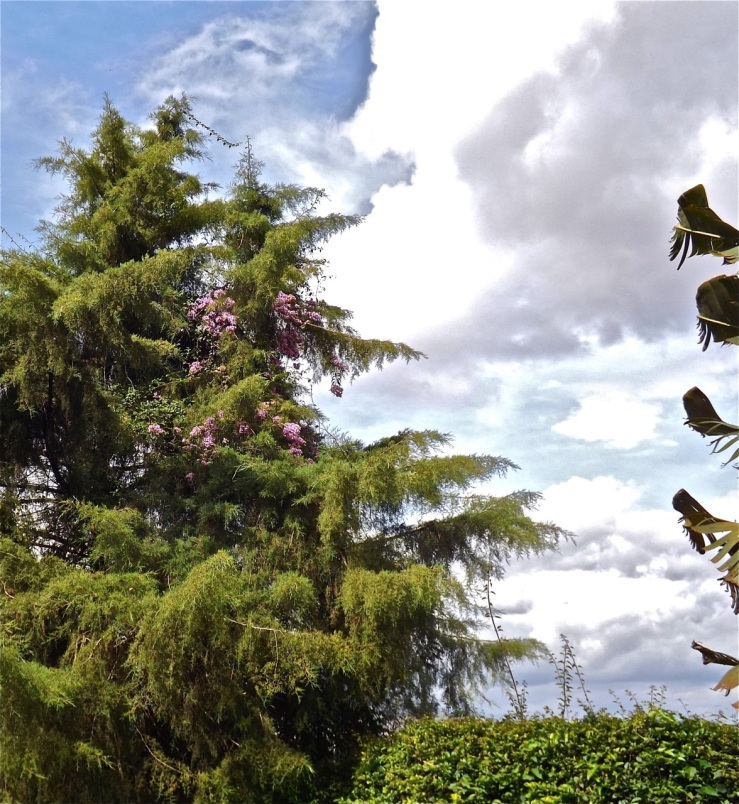 Bougainvillea is planted all along the front of the garden and is kept severely clipped as a tall hedge, but a long branch has escaped and has almost reached the top of the tree.

To see what’s blooming in other garden bloggers’ gardens, check out May Dreams Gardens.

We arrived in Niamey, Niger, in August 2006.  My husband worked at the U.S. Embassy there, and this house had been assigned to Embassy families for many years. It had always been much appreciated for its nice patio, flat rooftop (reached by spiral staircase), and large lawn for outside entertaining. However, by the time we took possession, there wasn’t much to the garden except grass.

Very short, ragged hedges bordered the sidewalks that went around the house. You had to step over them to get on to the lawn.  Most of the few other plants were lined up at the base of the front wall. The areas around the backdoor and the pool were bare dirt — except during the rainy season, when they turned to mud. On the plus side, however, there were mature palms, a baobab, mangoes, frangipanis, and some roses.

On the ground, I wanted curves to echo the circular outlines of the tops of the palms, the fanned out clusters of the frangipani leaves, and the spiral of a staircase leading up to the roof. I needed to link a small front garden (planned as an ornamental display of plants to be viewed while sitting on the patio), a large side lawn (an entertainment area for large groups), and a back fenced rectangular pool area. I played with various wavy planting bed shapes, but the various parts of the whole space weren’t merging smoothly.

Then I had a strange inspiration: I noticed the way the razor wire topping the 8 ft. walls looped round and round.  This gave me a concept for form and organization.  All the planting beds became loops — some circles, others a little more oval like a smushed roll of the wire.  The loops overlapped, two or three in a set; the walls, walkways, and the house sliced through them. The loops were smaller in the front garden and got bigger as they led into the big side lawn. They passed through the open metal fence of the pool area, joining it to the lawn.

We rimmed all the edges of the smaller front beds with short hedges. Half the bushes had lime green leaves, half were darker, which set off the overlapping effect. We filled in the beds with a variety of tropical and temperate-climate flowers, as well as banana and papaya plants.  The plantings in the larger circles on the side lawn were more freeform without hedges. Using the concept of loops of wire/flower beds, each area of the garden was defined, yet flowed into the other areas.

What my concept did not include, however, was a good plan for water, or  rather the lack of it. It took a lot of watering to keep those beds looking lush (although much the same was true for the grass they replaced). We did let the grass and some of the bedding plants go brown at the height of the dry season and experimented with timed irrigation. Toward the end of our time there, I began to find more drought-resistant plants like agaves. (The local plant sellers farmed down at the river’s edge and generally catered to the expats’ desires for tropicals and for the flowers they knew from home, not to a need for dry-climate plants.)

If we had stayed longer, I would have consolidated the more water-greedy plants in the beds in the front garden and put more drought-resistant plants and maybe some gravel in the side lawn beds.

Click on the first photo below to scroll through a series of pictures of the garden. The time difference between BEFORE and AFTER was about 20 months. We lived in this country for 2 years.

BEFORE: the side lawn

BEFORE: the front garden

SOON AFTER: the lawn. The round ornaments in the left foreground are large local water pots buried bottom-side up. 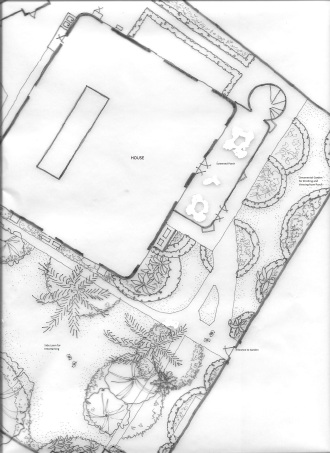 AFTER: irrigating the front garden

AFTER: the front from the roof

AFTER: the front garden and the staircase 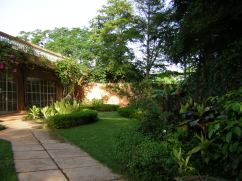 AFTER: the front garden

AFTER: the front garden from the carport 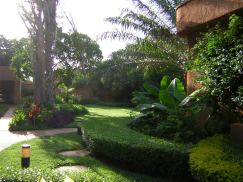 AFTER: from the front to the side

AFTER: across the side lawn 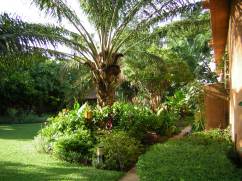 AFTER: the walkway along the house

AFTER: along the side of the house

AFTER: looking toward the mangoes 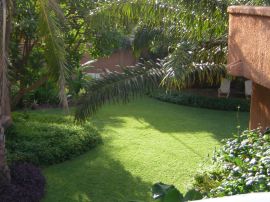 AFTER: part of the side lawn from the roof

AFTER: bananas along the side walkway

AFTER: the side lawn from the back

AFTER: the side lawn looking to the back 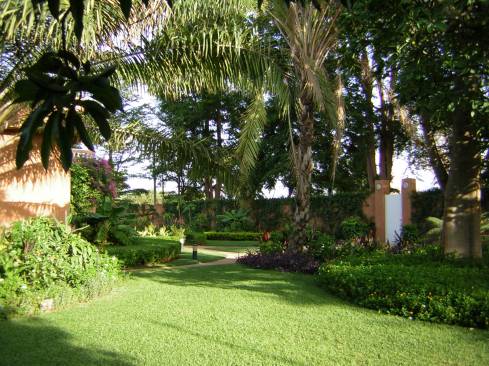 AFTER: the side lawn looking to the front gate

AFTER: the side walkway looking to the front

AFTER: the front planting beds