There’s a swearing-in ceremony for new Peace Corps Volunteers taking place in our garden right now, which has caused me to stop moving plants around long enough to write a new post.

A couple of weeks ago, a friend organized an outing to a wonderful place called the Gako Organic Farming Training Centre (GOFTC) — located just on the edge of the Kigali city limits.  Our host and guide there was Richard Munyerango, founder and Managing Director of the center and a tremendous source of knowledge on small farming techniques.

Since 2000, GOFTC has trained over 60,000 farmers from Rwanda, Burundi, and the D.R.Congo, among them demobilized soldiers, disabled persons, women’s groups, and many participants in the Send a Cow and OXFARM programs.

Our first stop of the morning was a small house surrounded by a fenced demonstration garden of about an acre, which Richard had created to show how a small holding could feed a family.

The first thing we noticed as we passed through the gate was the paved trench that directs the street’s rainwater runoff into the property.

The water passes through a series of screens (or would were this not the dry season). . .

and is saved in an underground tank. 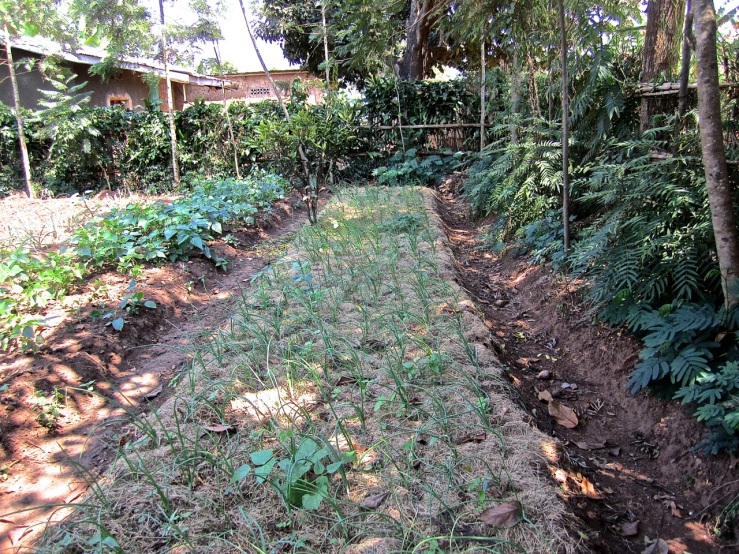 To the right of the trench and filters are mounded rows of vegetable crops. (Click any photo to enlarge it. To scroll through all the enlarged images, click on ‘Continue reading’ below and on any thumbnail in the gallery.)

Just beyond the water tank and planting beds is a raised rabbit hutch, looking a bit like a an ark. 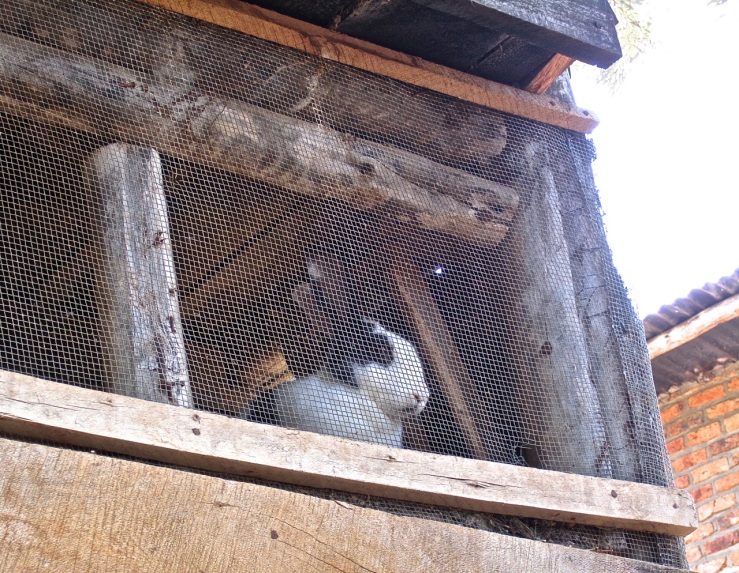 Behind the hutch are stalls for a cows or some goats, but neither were in residence when we visited. The center raised chickens until the Avian Flu scare of several years ago. Richard hopes to re-introduce them eventually.

The rabbit cages are raised so that droppings and urine can be captured.

The urine runs into a holding tank and is added to garden’s compost piles to help them break down faster. 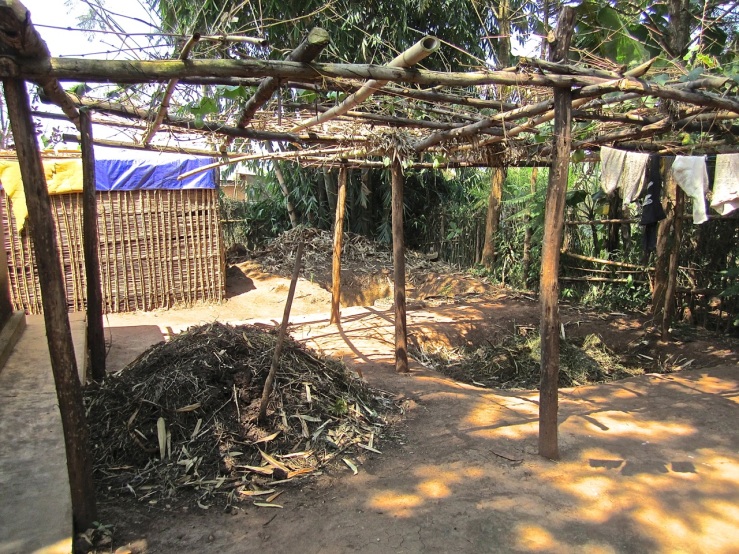 The composting area, just beside the hutch, is covered to help retain moisture in the pile on the left. Compost material is collected in the pit on the right.

Above, Richard lifts the row cover to reveal mushrooms.

Behind the house are rows of pineapples and Pennisetum grass (animal fodder), as well as a small mango tree. 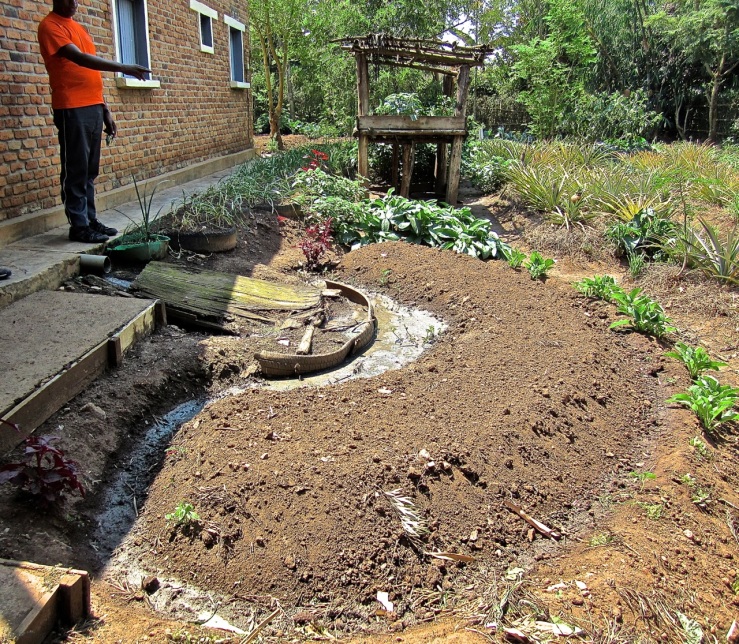 Behind the kitchen, another trench system reuses grey water.  The surrounding beds are planted with herbs and greens.

At the other side of the house are several mounded gardens. The one above is terraced, using old nylon rice sacks.

The mounded garden above is a “keyhole garden” — so called because of the opening that allows the gardener access to a center hole . . .

to which compost material is continually added.

(To watch a charming video about making a keyhole garden (by the organization Send a Cow), click here.) 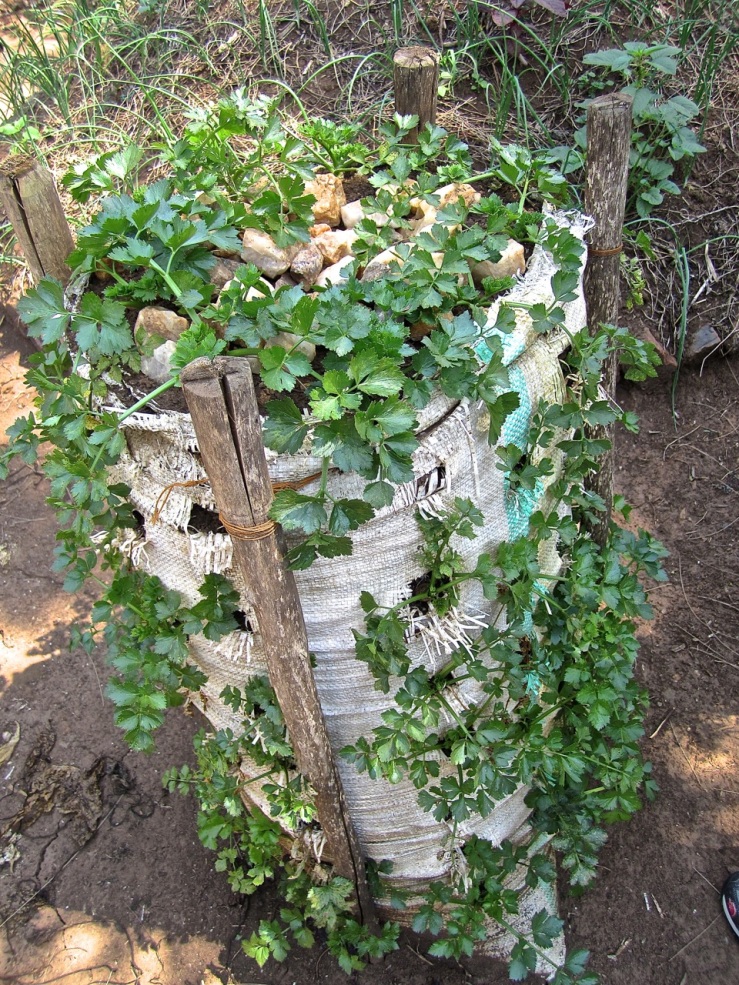 There were also several sack towers, this one planted with parsley. The rocks at the top keeps water moving straight down into the dirt.

A variety of trees surround the garden. This one is a Moringa, which provides food for both humans and animals from its leaves.  (More about this highly nutritious tree here.)

In my next post, I’ll continue with our tour of the main GOFTC facility. 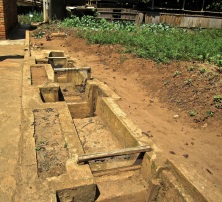 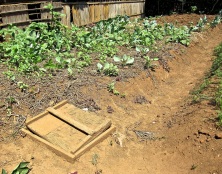 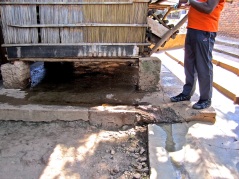 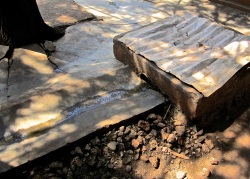 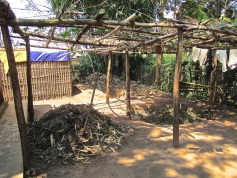 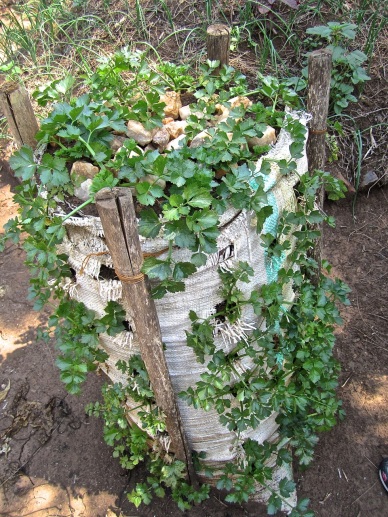 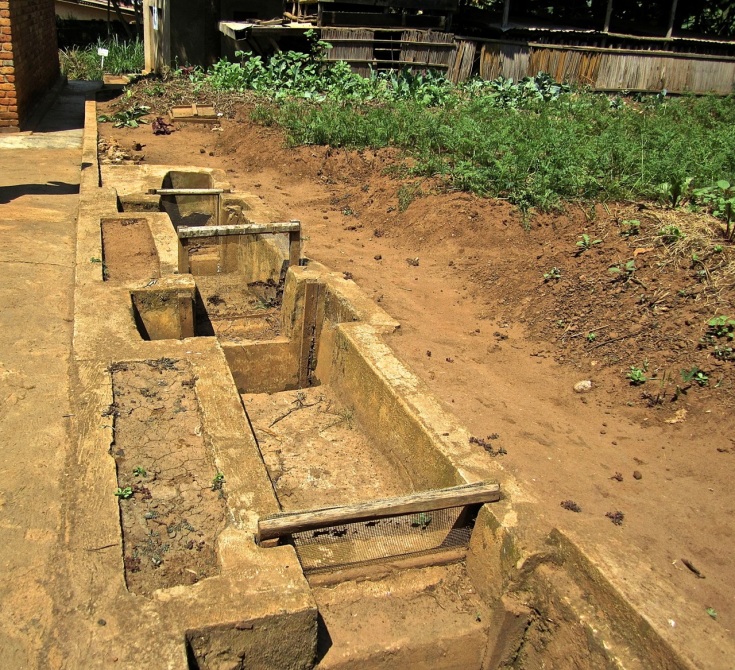